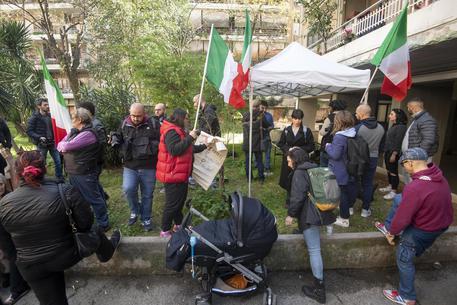 (ANSA) - Rome, April 29 - Police on Monday arrested two members of a neo-Fascist group for allegedly gang raping a 36-year-old Italian woman in a private club in the province of Viterbo, north of Rome. One of the two men is Francesco Chiricozzi, a town councillor elected on the list of the far-right CasaPound group in the town of Vallerano. The other suspect is also said to be a militant of the neo-Fascist group.
The alleged attack took place on April 12 after the men had got the victim drunk.
The case against the suspects is backed by videos of the violence recorded on a mobile phone, sources said. Deputy Premier and Interior Minister Matteo Salvini reiterated his call for the use of chemical castration in such cases. "No tolerance for paedophiles and rapists," said League leader Salvini. "Jail is not enough. Treatment is needed too. "Call it chemical castration or androgenic blockade. "The substance is that we will request the immediate debate in the Lower House of our bill, which has been stuck for too long, to intervene with these individuals. "Whoever it is, white or black, young or old, should be punished and treated". However, the League's government coalition partners, the 5-Star Movement (M5S), said it was against the proposal.
"This chemical castration thing must stop," the M5S said in a statement.
"It's a mockery for women and it is not in the contract of government.
"The most curious thing is that CasaPound had called for chemical castration too and, as coincidence would have it, one of their councillors has been arrested for rape".
Vallerano Mayor Adelio Gregori said that Chiricozzi had been put under investigation over the February 2017 beating of a young man who had made comments about CasaPound online. He said Chiricozzi was a minor at the time of the attack and he did not know how the probe had progressed. "What happened in Viterbo is shocking," said fellow Deputy Premier and M5S leader Luigi Di Maio.
"The lowlifes who raped this girl will pay for it big time.
"If what the press is reporting is true, I hope they get 30 years in jail". CasaPound Italia President Gianluca Iannone said that Chiricozzi had been expelled from the party and would quit his role as councillor on Tuesday. "As far as we are concerned this is a heinous act," Iannone told ANSA. CasaPound Italia Secretary Simone Di Stefano said via Twitter that Chiricozzi should face chemical castration if he is proven guilty. Nicola Fratoianni of the leftwing La Sinistra party said CasaPound should be banned.
"The list of acts of violence, threats and bullying by members of this neofascist organization gets longer every day," Fratoianni said.
"The time has come to dissolve it".