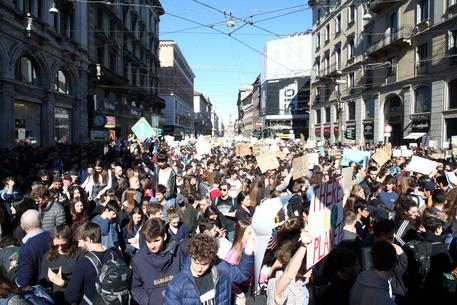 (ANSA) - Rome, March 15 - Tens of thousands of people took to the streets across Italy on Friday to protest against the lack of government action against climate change as part of an international 'climate strike'.
In Milan, placards raised high by students had 'Friday for Future' and 'No time left' written in English on them.
One of the large banners in Italian called on governments to "act, time is running out. Today we are protesting in 182 squares in Italy to call for one thing only: to have a future". Other students had written "why should we study for a future when there will not be any". Organizers said that, as of mid-morning, some 30,000 people were taking part in the march in Milan alone.
Tens of thousands were doing in the same in other cities.
Prime Minister Giuseppe Conte wrote on his Facebook page that "climate change is a crucial challenge for the safeguarding the future of our planet. Heads of state and government not only have the moral obligation to listen to the cries of alarm being raised today from every corner of the world, they must also take concrete steps. Apathy would be an unforgivable, historic sin." He added that his government sees climate change as "one of the most important challenges we are facing and that the new European Commission will be called upon to face." Conte said that "we still have a long way to go" but that "the presence of thousands of young people in the streets gives us more stimulus to move forward".