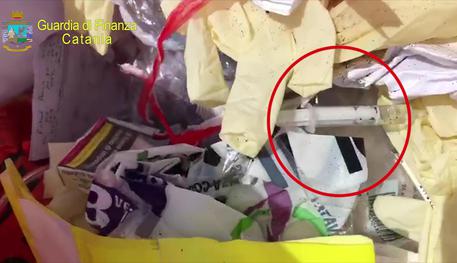 (ANSA) - Rome, November 20 - Italian judicial authorities on Tuesday ordered the preventative seizure of the Aquarius migrant-rescue ship in relation to a probe into alleged illegal dumping of waste by medical-aid NGO Médecins Sans Frontières (MSF - Doctors Without Borders). The ship is currently in Marseilles.
The case regards the alleged dumping of "dangerous and potentially infectious" refuse, including medical materials, as if it were ordinary household waste.
Prosecutors suspect that 24,000 kilos of waste was dumped in this way on 44 different occasions. The waste was alleged dumped in 11 ports - Trapani, Pozzallo, Augusta, Catania and Messina in Sicily; Vibo Valentia, Reggio Calabria and Corigliano Calabro in Calabria; Naples and Salerno in Campania; and Brindisi in Puglia.
In total, 14 people are under investigation in the 'Borderless' probe conducted by state and finance police and coordinated by Catania prosecutors and 460,000 euros have been seized. "I was right to stop the NGOs' ships (landing in Italian ports)," Deputy Premier and Interior Minister Matteo Salvini said via Twitter."Not only did I stop the trafficking of migrants but, according to what has emerged, I stopped the trafficking of refuse too. #portichiusi (#portsclosed)".
MSF said that the Italian judicial authorities' request was a "disproportionate and unfounded measure, purely aimed at criminalising lifesaving medical-humanitarian action at sea". "After two years of defamatory and unfounded allegations of collusion with human traffickers, judicial investigations, and bureaucratic obstacles against our humanitarian work, we are now accused of organised crime aimed at illicit waste trafficking," said Karline Kleijer, MSF's head of emergencies.
The NGO said the in-port operations, including waste management, of its search-and-rescue vessels had always followed standard procedures.
The head of the Italian branch of MSF, Gabriele Eminente, said in a press conference Tuesday that, during landings, "police and healthcare authorities come onboard. It is absurd to say that we were engaged in illegal waste trafficking under the eyes of the authorities, who were there during the 200 landings we managed." MSF doctor Gianfranco De Maio also lashed out at the judges' claim of alleged risk of infectious diseases spreading due to incorrect waste disposal.
"My professional conduct and that of my colleagues, who work in countries where there is Ebola and cholera, has been attacked," De Maio said. "These charges are ridiculous. The World Health Organization uses our guidelines for waste disposal. To think that tuberculosis or hepatitis is transmitted through clothing is absurd." Catania preliminary investigative judge Carlo Cannella also cited the risk of "AIDS" through incorrect disposal of clothing and other "contaminated objects, to which Deborah Gold, chief executive of the National AIDS Trust replied that "clothing categorically is not, and has never been, an HIV transmission risk". "This would have stood out as ridiculous even amongst the misinformation of the 1980s, never mind in 2018," she added.