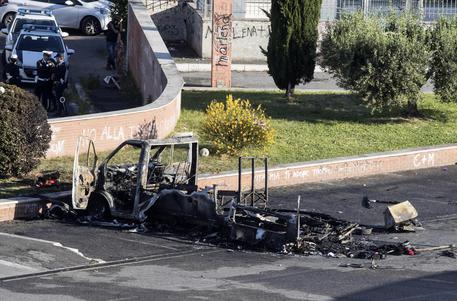 (ANSA) - Rome, May 10 - Rome investigators have opened a homicide probe after two children and a young woman died when a camper van caught fire early on Wednesday in the Centocelle district of the capital. According to initial reports, the victims are three sisters aged 20, eight and four of Roma ethnicity. The homicide probe was opened after traces of flammable liquid were found outside the vehicle, sources said.
Survivors of the blaze in the camper, which was home to a family made up of 11 children plus the parents, told investigators that they had recently received threats, sources said. The investigators will try to establish the nature of the threats and identify a possible motive, if there was foul play, with racism or dynamics within the Roma community possible factors The camper was in a shopping centre car park.
Prosecutors are also investigating suspected arson.
The Sant'Egidio lay Catholic charity, which does a lot of work with Roma, said the incident showed "the Roma have been the victims of unprecedented violence".
Former premier and centre-left Democratic Party (PD) leader Matteo Renzi called for "harsher punishment than normally envisaged for whoever caused the fire" while the Codacons consumer group said "the camper should not have been there, it is a sign of urban decay".
Amnesty International Italia said the "tragic deaths...repropose the issue of the right to proper housing" on the part of Roma families.
President Sergio Mattarella said the incident was "a horrendous crime, whoever committed it". He said "when you kill children you are below the level of a human being". Mattarella said "the culprits must be found and severely punished".
Lower House Speaker Laura Boldrini tweeted "three sisters burned alive in the camper in which they lived. An aberrant act, full of hate and violence." Investigators were said to be examining video footage of the fire.