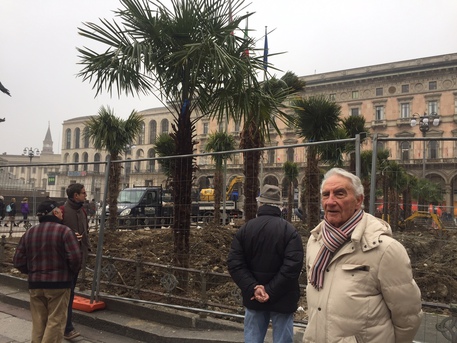 (ANSA) - Milan, February 16 - A number of palm trees in Milan's central Piazza Duomo were set alight on early Sunday amid a dispute after global coffee giant Starbucks planted them on Tuesday in the city's famous Piazza Duomo.
One suffered extensive damage to its trunk.
Starbucks plans to open its first Italian retail point in Milan in 2018 and planted the trees as part of a contract it won to restyle the green spaces surrounding the equestrian monument to Victor Emmanuel II for the next three years.
The palm trees had set off an outcry from the city government's centre-right factions and a protest was staged on Saturday by the radical rightwing movement Casapound and the anti-immigrant Northern League party, who railed against the "Africanization" of the historic piazza.
Mayor Giuseppe Sala had said that he wasn't "very enthusiastic about the idea" but pointed out that there was a historic precedent for the palm trees going back to the late 1800s in the same square and that, as such, the city's superintendency had approved the plan, which also includes banana plants.
A bronze statue of a palm tree marks the exact center of the city in the St Sepulcher Church.
Northern League leader Matteo Salvini, nonetheless, had commented by saying that the planting of the trees was "madness.
Now we only need sand and camels for the illegal immigrants to feel at home".
No alarm was raised during the night and only in the morning did the local police go to the scene, after a photo was circulated on Facebook. The authorities are checking surveillance camera footage. Salvini added that "I do not like it that a multinational comes and decides what to do in one of the most beautiful squares in the world. It is as if McDonald's were to deck out St Mark's Square and fill it with French fries everywhere, or (as if it were to do the same to) the Colosseum."