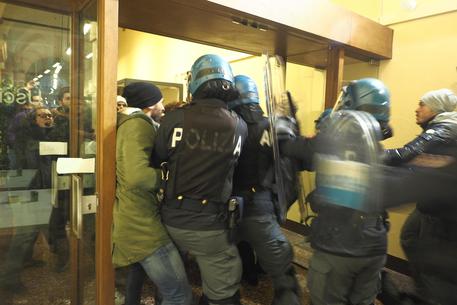 (ANSA) - Bologna, February 9 - Tension and scuffles marked the day in Bologna, where activists from university collectives occupied the library in the Humanities Department as part of a protest that has been going on for days against the placing of turnstiles at the entrance.
Two protesters were arrested after the worst of the clashes. Police in anti-riot gear came after being called by university staff to clear the protestors out, some of whom were reportedly injured. The protestors had tried to barricade themselves in using chairs, desks and benches. The collectives then gathered in the main street of the university and scuffled with police, throwing cobblestones and other objects at them. The roughly 100 students then backed off and moved to behind the Economics Faculty, faced by a cordon of about 30 police who baton-charged them to free the square as locals took refuge in shops.
The square was left strewn with broken glass and tossed chairs.