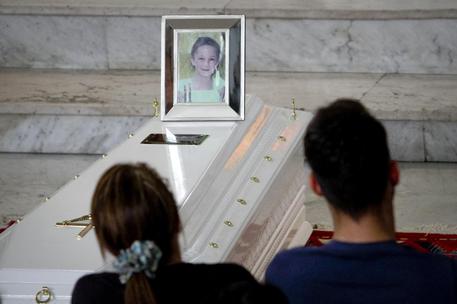 (ANSA) - Naples, April 29 - Italian police on Friday made an arrest in the death of Fortuna Loffredo, a six-year-old girl who fell to her death from a balcony in Caivano near Naples in June 2014.
An autopsy on the girl's body found she had been the victim of sexual abuse.
The partner of a neighbour of Fortuna's mother was arrested, police said. The neighbour's son, Antonio, had also fallen to his death a year previously. The suspect, Raimondo Caputo, 44, is accused of sexual violence and murder.
Caputo has been in prison since November 2015, suspected of sexual abuse of the three-year-old daughter he had with his girlfriend, who is on house arrest for the same accusation.
Prosecutors said they suspected since the beginning that Fortuna had been the victim of a paedophilia ring.
Fortuna's mother, Domenica Guardato, said that she knew the couple was responsible for her daughter's death.
"I've always been sure that it was them, I always said it," Guardato said.
"I've never met him, but I asked her and she always denied it," she said.
"She is sick, and there's also another person who knew everything, that woman's mother".
Guardato said that everyone in the neighbourhood kept quiet about Fortuna's death, invoking an unspoken code of silence about the crime.
"I was thinking, hoping, that today, at least today, someone from this cursed place would come up to me to say something, a hug, but instead, nothing. Here, there's always been and there always will be silence".
She said she is the "only condemned" person to emerge from the tragedy.
"Because here I am with an immense pain, that will never go away. Because I loved Fortuna, as only a mother can, and they killed her. And still today I don't know why," Guardato said.
Naples prosecutor Domenico Airoma said that it was children who gave the investigation a breakthrough.
"The adults were hindering the investigations. The children permitted the turnaround," Airoma said, referring specifically to three children of the arrested man's girlfriend.
Airoma said that the adults in the neighbourhood had "a conspiracy of silence, indifference, and culpable collusion". The Naples prosecutor's office investigated the case for two years up against this climate of silence.
On Friday investigators said that Caputo had been sexually abusing Fortuna for some time, and that he allegedly pushed her from the eighth-floor balcony when she put up resistance to his abuse.