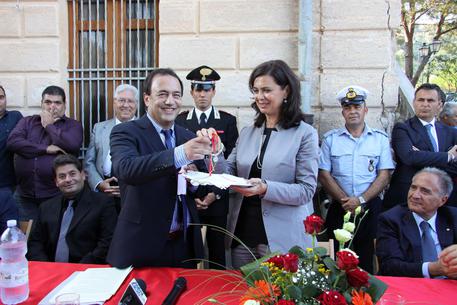 (ANSA) - Catanzaro, March 29 - The mayor of Riace in Calabria has come 40th in Fortune magazine's ranking of the world's 50 greatest leaders for his work in rejuvenating the once-dwindling town by recognising the potential of immigrants in a way that could prove a model amid Europe's refugee crisis.
Domenico (Mimmo) Lucano was the only Italian on the list.
Lucano has welcomed thousands of refugees to the Calabrian town, previously only famous for the two male bronzes that were fished out of the sea in 1972 and are celebrated as supreme achievements in Greek art as the Riace Bronzes.
"For decades emigration drained life from Riace, a village of 2,000 on the Calabrian coast," Fortune said. "When a boatload of Kurdish refugees reached its shores in 1998, Lucano, then a schoolteacher, saw an opportunity. He offered them Riace's abandoned apartments along with job training. "Eighteen years on, Mayor Lucano is hailed for saving the town, whose population now includes migrants from 20-some nations, and rejuvenating its economy. (Riace has hosted more than 6,000 asylum seekers in all.) "Though his pro-refugee stance has pitted him against the mafia and the state, Lucano's model is being studied and adopted as Europe's refugee crisis crests," Fortune said.
Among the first to stress the importance of Fortune's recognition of Lucano was Lower House Speaker Laura Boldrini, who knows his work well from her previous position as spokesperson for the UN High Commissioner for Refugees (UNHCR).
She wrote on Twitter: "Satisfaction for Mimmo Lucano, Riace mayor, a precursor in welcoming migrants and integration". Former Calabria governor Agazio Loiero, who commissioned Wim Wenders' short feature on migrants, The Flight, shot largely in Riace, said: "the recognition given to Mimmo Lucano, the only Italian among the most powerful leaders in the world, is news that should make all Calabrians proud.
"Certainly, that adjective, powerful, today, generally refers to a certain type of power.
"In Calabria, on the other hand, it can signify something else: above all the capacity to welcome those who come from far-off poverty, malnourished and unexpected. In this attitude, inherited from our most ancient roots, Mimmo Lucano is truly powerful".
Lucano himself said: "It is a recognition that in its importance and prestige makes me slightly uneasy - this because I don't aspire to high office or a career because I want to be a man of the people and I want to help people in need, people I see myself in.
"I hope this gratification may represent a positive turning point for Riace and the whole of Calabria, giving even the 'last ones' the possibility, which we obstinately seek, to see their claims recognised".