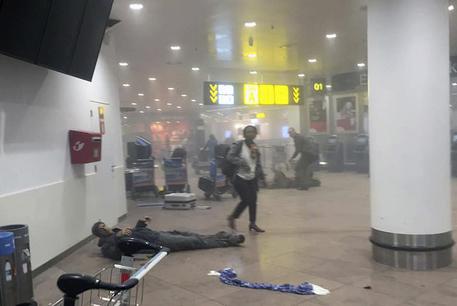 (supersedes previous)(ANSA) - Rome, March 22 - Italy was on maximum alert Tuesday in the wake of at least two terror attacks in Brussels, which Foreign Minister Paolo Gentiloni said have not involved any Italian nationals.
The so-called Islamic State (ISIS) terror group has claimed responsibility for the deadly attacks, Russian news agency TASS cited the ISIS-linked Amaq news agency as saying.
"For now we have no record of Italian citizens involved in the Brussels attacks," Gentiloni said. He added he has spoken to his Belgian counterpart, who "is working with the embassies. It will be a few hours before the situation becomes clear". He added that "our diplomatic infrastructure has been activated to provide maximum assistance to our fellow nationals". The foreign ministry urged Italians in Brussels to "avoid going anywhere at the moment" and said its crisis unit is "active".
Italian Ambassador to Brussels Vincenzo Grassi said "so far no hospital we have contacted has communicated the presence of Italians but this is not definitive". He said the Belgian cellphone network was "very bad, many hospitals are submerged with calls and we too are finding it hard to respond to all the questions arriving at the embassy". He said the situation was "still very confused".
Belgian authorities earlier confirmed 26 people died and 130 were wounded in blasts at the capital's Zavantem national airport and at the Maalbeek Metro Station in central Brussels near European Union headquarters. An unexploded device and a Kalashnikov rifle were found at the airport, where government officials earlier confirmed 11 were killed and 81 were wounded.
All transportation in Brussels has been shut down as the army took to the streets.
The Italian interior ministry raised the security level at Italy's airports and Interior Minister Angelino Alfano has summoned the national public safety committee to assess "further measures to combat and prevent the terrorist threat".
Premier Matteo Renzi will preside over that meeting to be held at 15:00, and will make a statement on the attacks at the premier's office in Palazzo Chigi at 16:00.