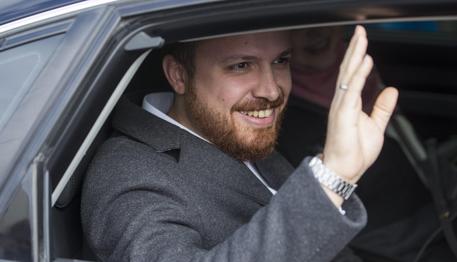 (ANSA) - Bologna, February 16 - Prosecutors in the northern Italian city of Bologna are investigating the son of Turkish President Recep Tayyip Erdogan as part of a money laundering probe, ANSA sources close to the matter said Tuesday.
The inclusion of Erdogan's son Bilal in the list of people under investigation follows a petition to authorities from Turkish businessman Murat Hakan Uzan, a political opponent of Erdogan who is wanted by Turkish authorities and is in exile. The petition asks Italian police to investigate potential sums of money brought to Italy by Bilal, who has been studying at John Hopkins University in Bologna since last autumn.
Bilal, 35, officially came to Italy to resume PhD studies he began in 2007. However, Turkish anti-government sources say he flew to Italy in the fall with a "large sum of money" as part of a "getaway operation", according to Uzan's petition.
The petition also states that Bilal arrived in Bologna with a team of armed body guards who were not granted access to Italy until they were conferred Turkish diplomatic passports.
Uzan says he and his family are victims of a political and judicial campaign launched by Erdogan.