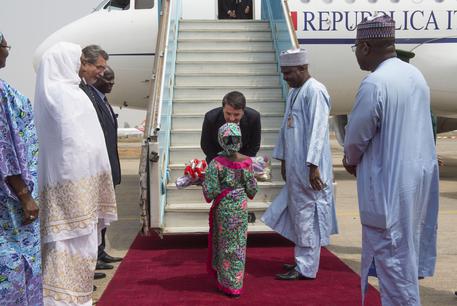 (ANSA) - Rome, February 1 - Italian Premier Matteo Renzi on Monday said Italy would make its contribution to the Turkey refugee aid package, ending a weeks-long resistance that had sparked friction with Brussels. "At this point we will give our contribution to Turkey to save human beings," Renzi said on a visit to Nigeria, while insisting that the EU could open all the infringement procedures it liked for exceeding budget parameters but Italy would keep on saving lives in the Mediterranean. "We will make every effort to save human lives in the Mediterranean: we have saved, and we will continue to do so, thousands of lives while Europe turned the other way. Before the Stability (and Growth) Pact there is a pact of humanity".
Renzi went on to say that all migrants are equal and Italy will not be provoked by the EU.
"We think all migrants are equal," the premier said in the Nigerian capital. "To envisage treating differently the cost of saving Eritrean children seems absurd to me - just a bureaucratic perversion. "But we will not be provoked, in spite of the professional quarrelers in Brussels trying to relaunch from Brussels as though there were Serie A and Serie B lives".
Earlier, Renzi had reiterated that Italy was no longer taking orders from the European Union, amid the fresh clash over the cost of coping with the migrant and refugee crisis.
In his e-news, the combative premier asserted that far from following diktats from Brussels, Italy was now in fact leading the EU.
The premier spoke as the European Commission made it clear that an aid package to Turkey for the refugee emergency was not to be counted in the Stability and Growth Pact.
The EC also reminded Rome Monday that a decision on its request for budget flexibility will be made, along with the final verdict on the 2016 budget, in the spring.
Italy is "no longer taking orders" from the EU, Renzi wrote on his website. "Reforms are now laws, and economic fundamentals have returned to a plus sign after three years of recession," he wrote. "We can go back to doing our job, which is to lead Europe - not to go take orders in some palace in Brussels". Italy is no longer indebted to Europe, Renzi went on. "For years, Italy was morally indebted to European institutions (and to) its own citizens, because it spoke of reforms it didn't carry out," he added.
Italy has been quarreling with the European Commission recently over its veto of a fund for refugees in Turkey, saying it will only contribute to the fund if the EU agrees to free its spending on migrant rescue, processing and hosting from Stability Pact constraints.
European Commission spokesman Margaritis Schinas, meanwhile, said that the EU executive stated in December that member States' contributions to the package of three billion euros in aid for Turkey in exchange for cooperation over the refugee crisis are excluded from deficit calculations. Italy has been accused of holding up the aid package, with Renzi saying the money must be outside the parameters of the Stability and Growth Pact. "The Commission had already clarified in December that the national contributions to the three-billion-euro fund for Turkey are notconsidered in the deficit calculations for the Stability and Growth Pact," Schinas said.
Also Monday in Brussels, another European Commission spokesperson said that the EU executive will decide whether it has granted Italy's request to have flexibility in the application of budget regulations for its spending on asylum seekers in "spring". The spokesperson added that the valuation will be made "on a case-per-case basis, ex post, on the basis of the expenditure undertaken". On Friday Renzi said after a bilateral meeting in Berlin with German Chancellor Angela Merkel that he hoped Brussels would give a response to Italy on the budget flexibility request this week.
Italy has also requested flexibility for the terrorism emergency, among other things.