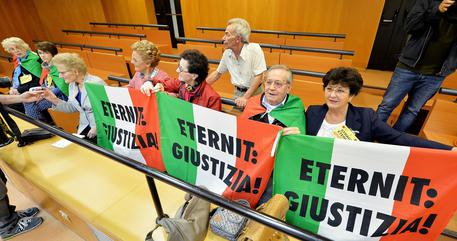 (By Sandra Cordon).
(ANSA) - Turin, July 24 - The bitter and long-running Eternit case into the asbestos poisoning deaths of 258 people was referred Friday to Italy's Constitutional Court to rule on whether the former company owner could be tried a second time.
In the case's latest twist, a preliminary court judge has asked for a ruling on the constitutionality of a second trial against Swiss tycoon Stephan Schmidheiny.
One of his lawyers said Friday that he was "pleased" the lower court accepted the defense's questions about the constitutionality of trying their client twice.
That issue is the "crux" of the case, added Astolfo Di Amato.
But a spokesman for some of the families of the victims, who have fought hard for years to see Schmidheiny prosecuted, said the argument did not stand.
"It would be as if citizens were given an exemption for murder," said Bruno Pesce of Afeva, the association of asbestos victims.
Schmidheiny had been charged with failing to provide adequate safety measures at four Eternit cement plants in Italy, charges he has denied.
In 2012, Schmidheiny was found guilty of negligence at the now-defunct Eternit's Italian factories in the 1970s and 1980s and sentenced to 18 years in prison, a ruling applauded by families of the victims.
However, they were stunned last November when Italy's highest appeals body overturned the 18-year sentence against Schmidheiny, saying the case had timed out. "Damages and compensation are also voided because the crime timed out before the conviction," the chief justices of the Cassation Court wrote in a decision released in February.
The Court pointed out that 15 years had passed since the Italian government outlawed asbestos in 1993 and when it first indicted Schmidheiny in 2009.
"This was well over the 15 years required for the charges to time out based on (a) 2005 law," the Court wrote.
In fact, charges against him had "timed out even before the trial had started", the appeals court ruled.
Families of the victims were so outraged that the prosecution announced they would not drop the case but would try to find other avenues to follow.
Asbestos-linked tumours have been reported among Eternit staff, their families, and people living near the factories affected by asbestos dust in the air, while hundreds more are ill. Mining of asbestos began in parts of the world in the 19th century, and the mineral was prized for its insulating abilities.
However, as its dangers to health became better known including the links between inhaled asbestos fibres and lung cancer, authorities around the world started to ban its use.
Critics have said that some 2,000 people have died because of the Eternit plants and their production, including its use as in insulation.
Asbestos-related illness continues, by some estimates at a pace of about 50 new cases per year.
Employees and their families have long claimed that Eternit did little or nothing to protect its workers and residents living around its factories from the dangers of asbestos.
Premier Matteo Renzi last year pledged to change Italy's statute of limitations amid widespread anger and dismay after Schmidheiny's conviction was overturned.
Meanwhile, Turin prosecutors said Friday they want to add new charges related to 94 other deaths from asbestos poisoning, sources said outside the preliminary hearing.