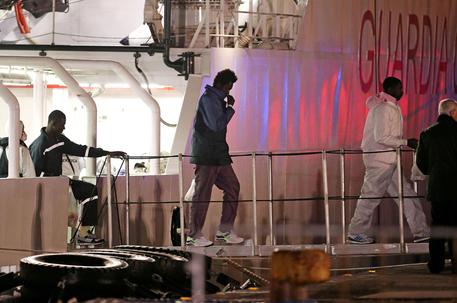 (ANSA) - Catania, April 21 - Italian investigators said Tuesday that they estimated that around 850 people were aboard the migrant-boat that sank in the southern Mediterranean last weekend. Rescuers saved 28 people from the wreck. "It has not yet been possible to establish the death toll," investigators were quoted as saying by ANSA sources, adding that survivors have given numbers ranging from 400 to 950 passengers. But they added the survivors' testimony and a report from a Portuguese merchant ship sent to rescue the boat led them to estimate that "there were around 850 migrants aboard".

Prosecutors believe that two causes contributed to last weekend's migrant-boat disaster The first was the movement of migrants aboard the overcrowded boat and the second was a bad manoeuvre by the trafficker at the command that led to a collision with the merchant ship that had been sent to rescue the refugees, the King Jacobs, Catania prosecutors believe, according to ANSA sources.

The survivors said that the trafficker who was at the command of the boat piloted it carelessly in the final moments as he was trying to hide and not be recognised as a smuggler, the sources said.

Italian President Sergio Mattarella on Tuesday demanded more be done to stop migrant-boat disasters. "We are faced with shocking tragedies," Mattarella said at a ceremony for World Book Day.
"Traffickers in human beings are provoking the slaughter of innocents. We feel this cutting wound.. It's our duty and that of Europe and the whole international community to do more to prevent these disasters".