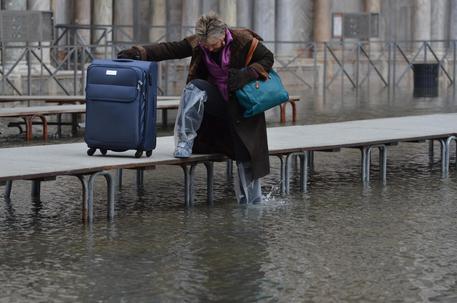 (ANSA) - Venice, November 21 - Venice officials on Friday strongly denied reports they intend to ban trolley suitcases from the lagoon city, saying only commercial carts will be forbidden lest they damage the ancient cobbles.
"I intend to deny with absolute firmness that the City of Venice ever thought of banning trolleys in the historic centre," said Vittorio Zappalorto, a special city commissioner.
He added commercial carts that are often dragged out very early in the morning hours are a particular target because they are noisy and cause damage.
"The document contains only a reference to means of goods transported by land, that is to say carts, which having hard wheels ruin the historic Venetian cobbles," he said.
Some luggage with wheels are also damaging cobblestones and walls of building, he noted.
Historic bridges are especially hard hit,"because of the continuous blows caused by going up and down," added Zappalorto.
But that doesn't mean they will be banned, he said.
And he issued a plea for an inventor to come up with wheeled luggage that won't cause such damage to historic cities.
Such an item "would undoubtedly contribute to saving our architectural heritage and to the peace of residents and the tourists themselves".