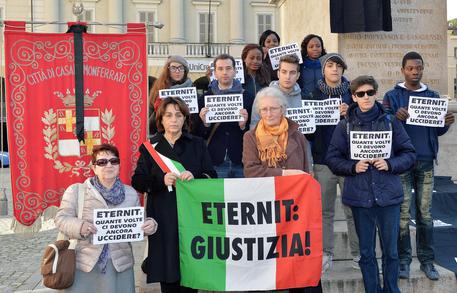 (ANSA) - Rome, November 20 - Prosecutors in Turin have completed a homicide probe into former Eternit owner Stephan Schmidheiny and are set to press charges over 263 deaths, ANSA sources said Thursday.
That comes one day after Italy's highest appeals body, the Court of Cassation, overturned an 18-year prison sentence against the Swiss tycoon, whose now-defunct Eternit ran several asbestos cement plants blamed for more than 2,000 deaths in Italy. Grieving families of victims, outraged over Wednesday's supreme court decision, took hope from the new case as well as from government pledges on Thursday to change the statute of limitations law that led to the annulment of the sole conviction in the asbestos environmental disaster.
Schmidheiny had been charged with failing to provide adequate safety measures at the plants, but the high court said the case had timed out.
In a statement Thursday, the Cassation Court added its remit was to deal only with the issue of the 1986 asbestos environmental disaster rather than with illnesses and deaths.
The objective "was to ascertain whether or not the disaster occurred," the Court said in a note.
Premier Matteo Renzi meanwhile said he would change Italy's statute of limitations, a promise supported by leaders of the Lower House and Senate who said they reached an agreement on the procedure for moving Renzi's bill through parliament.
"If a case like Eternit is a timed-out crime, then we have to change the rules of the game on the statute of limitations," Renzi told the RTL radio station. "We can't have the nightmare of the statute of limitations (in these cases). You cannot deprive people of the demand for justice," Renzi said.
"I was struck, as an ordinary citizen, by the interviews with the families (of the victims). They made me shudder a little".
About 150 people belonging to an Eternit victims group protested Wednesday outside the Cassation Court including many from Casale Monferrato in Piedmont, and others from different regions of northern Italy as well as people from Switzerland and Brazil.
Their leader Romana Blasotti, 85, lost five family members to asbestos-related diseases, which can often take many years to appear. One of the most common diseases, mesothelioma, can take decades after contamination to make itself known, making liability hard to prove.
"We want justice, and we believe that we will have it, after 35 years of struggle," said Blasotti, whose husband died in 1983, followed by a sister, a niece, a cousin and a daughter.
"When we started our battle, we knew we had to do it for our young people...but we did not succeed. The death rate in Casale continues at a rate of 50 to 60 deaths per year," she said.
Asbestos-linked tumours have been reported among Eternit staff, their families and people living near the factories who were affected by asbestos dust in the air, while hundreds more fell ill.
Employees and their families have long claimed that Eternit did little or nothing to protect its workers and residents living around its factories from the dangers of asbestos.
The Italian National Magistrates Association (ANM) said Thursday that it has been calling for Italy's statute of limitations laws to be changed for years. "Magistrates have been raising the problem of the statute of limitations for years", Rodolfo Sabelli of the ANM said.
Lower House Speaker Laura Boldrini and Senate Speaker Pietro Grasso reached an agreement on how to proceed with a bill changing Italy's statute of limitations, officials said.
"I confirm there is an agreement about this between the speakers of the House and Senate," said Deputy Senate Speaker Maurizio Gasparri during a debate on the Eternit case. He added that the bill will be examined first in the House.