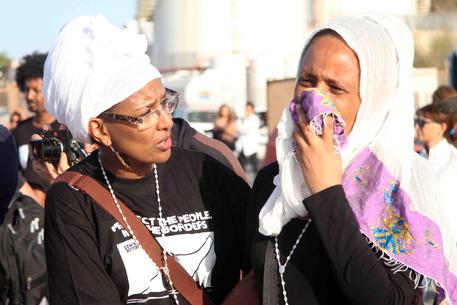 (ANSA) - Lampedusa, October 3 - Survivors and victims' relatives shared grief and embraces at the Lampedusa's port Friday as they honoured the anniversary of a migrant-boat wreck off the southern Italian island's coast, which took the lives of 366 African refugees fleeing to Europe on October 3, 2013. Survivors painted the breakwater blocks of the Lampedusa pier, helped by local high school students in the first of a series of initiatives organized by the October 3 Committee, a group formed to help the survivors and victims' relatives, to honour not only the first anniversary of the disaster but also all migrants who have lost their lives in perilous, desperate journeys across the Mediterranean seeking European shores.
"God is love," "RIP Henrick," and "You are always in my heart," were woven into some of the memorial compositions. Many of the survivors, who returned to Lampedusa for the event, broke into tears upon seeing the pier.
There were also moments of tension and European Parliament Speaker Martin Schulz was heckled as he spoke at the ceremony.
"This is a joke," shouted one protestor. "You lot are guilty, you are the killers". Lampedusa is closer to Libya than to Sicily and bears the brunt of migrant arrivals from North Africa.
One survivor, Luam, said coming back to Lampedusa was incredibly painful, but a duty to his fellow travellers swallowed by the sea.
Fisherman Domenico Colapinto bore searing memories. He said he pulled dozens out of the water, but others slipped from his hands, as they were covered in diesel fuel. He remembers helplessly watching as they drowned in front of his eyes.
Doctor Pietro Bartolo remembered how he managed to save Kebrat's life.
"She was surrounded by corpses. If I had not notices her feeble heartbeat, she would have ended up in a plastic bag like the others".
"You never get used to death, those who say that lie," said Lampedusa a resident named Bartolo. "Each time, the pain is immense, there is nothing to be done and nothing more to say. I have cried dozens of times in front of those devastated bodies".
The October 3 shipwreck was one of two that occurred that month, taking 400 lives and prompting the administration of former Italian premier Enrico Letta to set up the sea search and rescue programme Mare Nostrum to prevent further deaths at sea.
The disasters marked a major shift in public sentiment and political policy toward greater compassion for migrants, and pushed Italy to lobby the European Union for solidarity in dealing with migrants and reform in its approach to monitoring frontiers.
Speaking from Tunis on the shipwreck anniversary, Italian Interior Minister Angelino Alfano on Friday warned that Italy's Mare Nostrum operation must be shut down and be replaced with the European Frontex Plus by November.
Alfano reiterated that responsibility for saving migrants heading for Europe must be assumed by European authorities. "(We need to see) European action to show that Europe takes charge of its own borders," Alfano said.
"We will reach the objective of bringing Europe to patrol the Mediterranean border," he added.
"We will do it by November and my idea is that Frontex Plus should start as soon as possible, already at the beginning of November (and) right afterwards, Mare Nostrum should be closed," said Alfano.
Mare Nostrum has been effective, saving more than 90,000 lives and capturing 500 smugglers, but it was not designed as a permanent program, he said.
Nor should Italy continue to shoulder the burden of sea rescues of migrants heading for all parts of Europe and only passing through the Italian peninsula, he said.
"The (Mediterranean) is a European border," the minister said, adding that Mare Nostrum could not prevent some 500 people from dying and, according to survivors, 1,400 others from disappearing.