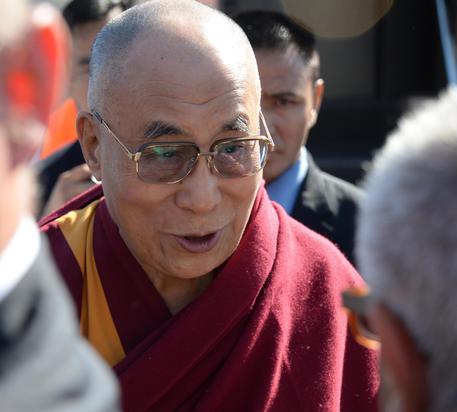 (ANSA) - Pisa, June 12 - Refugees forced to flee their countries could be helped by governments that intervene to create a better society so people can stay safe at home, Nobel Peace Prize laureate and Tibetan spiritual leader the Dalai Lama said Thursday.
The Dalai Lama has been visiting a monastery in Pomaia in northern Tuscany near the historic city of Pisa, meeting Buddhists from around Italy.
On Saturday and Sunday, the Dalai Lama will take part in teaching events in Livorno on the sea coast.
Asked by a reporter about the migrant crisis facing Italy, the Dalai Lama said Italians and particularly people on the island of Sicily, where many migrants fleeing North Africa arrive, are trying to be kind by accepting refugees.
"Italians, and the Sicilians in particular, are proving to have a big heart but to solve the refugee problem it is necessary to intervene in those countries, make efforts to overcome wars that are causing the exodus," said the Dalai Lama.
"This needs long-term thinking to get a really effective result," he added.
The Italian government estimates about 40,000 migrants arrived in Italy in the first five months of this year alone - roughly the same number as in all of last year.
Last October, after almost 400 migrants died in boat wrecks off the coast of Sicily, the government set up a search-and-rescue operation known as Mare Nostrum.
Some opposition politicians have said that effort is too expensive and only encourages human smugglers to keep crowding migrants onto flimsy boats to cross the Mediterranean for Italy, a gateway to the rest of Europe.