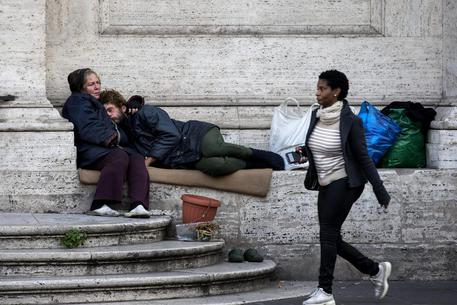 (ANSA) - ROME, APR 1 - Almost one in four Romans is suffering economic malaise, Catholic charity Caritas said Friday.
Some 23.6% of people living in Rome are in a state of "economic malaise", said the charity, which does a lot of work with the poor.
Further, some 10.3% are in "grave material deprivation", it said.
Some 14.1% is at risk of falling into poverty.
Another 6% struggled to make it to the end of the month, Caritas said.
Just 2.4% of Roman citizens have an income above 100,000 euros and account for 18% of total income, marking a huge gap with the rest of the population.
Four out of 10 Romans have an income below 15,000 euros.
The over-60s are the richest age bracket, Caritas said in its report on poverty in the Italian capital.
"Poor work prevails, precarious and badly paid," said in the report.
Further, some 45% of the city's population lives alone. (ANSA).