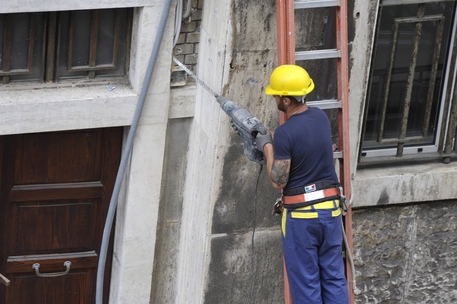 (ANSA) - Rome, January 31 - Italy's GDP dropped by 0.2% in the fourth quarter of 2018, according to provisional data released by ISTAT on Thursday.
This means that the economy technically went into recession with two consecutive quarters of negative growth after GDP fell by 0.1% in the July-September period. Italy was last in recession five years ago, with a downturn that ended early in 2013, having started in the middle of 2011.
Premier Giuseppe Conte said "I am not worried" on Thursday regarding the data that showed the Italian economy technically dipped into recession in the second half of 2018. "It's a transitory factor," Conte said at the inauguration of the academic year of the Università Cattolica. "Even the most incompetent analysts will have realised there is a trade war between the USA and China in which we are all the losers. "What we are interested in is concentrating on the resurgence of our economy, which will definitely occur in 2019, because our (budget) measures will start to take hold. "We have no reason to lose confidence. On the contrary, we have lots of enthusiasm". The premier added that he did not fear the European Commission would ask Italy to pass an additional corrective budget in the light of the GDP data. Conte's government passed an expansive 2019 budget designed to both boost growth and pay for key pledges, such as the 'citizenship wage' basic income for job seekers and the 'quota 100' pension reform that brings down the retirement age for some people.
The European Commission rejected the plan at first, but Rome and Brussels eventually reached an agreement to avert an infringement procedure when the government pledged to reduce the budget deficit for next year to 2.04% of GDP, having initially pencilled in a 2.4% deficit. Deputy Premier and Labour and Industry Minister Luigi Di Maio said Thursday that the latest figures showed the previous centre-left led governments of recent years had not been honest with the public. "The ISTAT data show something fundamental," 5-Star Movement (M5S) leader Di Maio said. "Those who were in government before us lied. They never brought us out of the crisis". He added that he was not worried about Italy's economic prospects, saying he does not think the government's growth forecasts will have to be revised. "The data from the auction of BTP bonds are highly encouraging," he added. "That means there is great confidence in our country - a country that has reformed the pension system to free up lots of jobs". The opposition centre-left PD said that the recession showed the M5S-League government was incapable of managing the economy.
"Enough excuses, alibis and increasingly intolerable propaganda," PD lawmaker Francesco Boccia told Radio Radicale.
"They've had eight months to show what they can do and everyone can see that the M5S-League economic car not only doesn't work, it's actually in reverse".