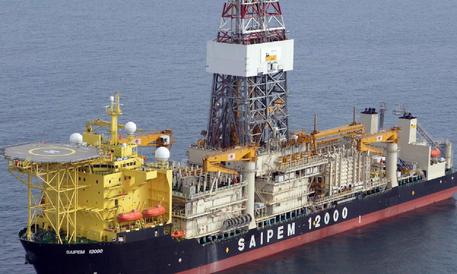 (ANSA) - Istanbul, February 23 - An ENI drilling ship blocked by the Turkish navy off the southern coast of Cyprus for two weeks is leaving to carry out "other activities" for the Italian energy giant, Cypriot Energy Minister Giorgos Lakkotrypis said Friday. The Saipem 12000 ship leased by ENI is now off the Cypriot port of Limassol for refuelling and will shortly leave for other drilling work, he told a local TV station.
On Tuesday the Turkish navy extended through March 10 its Navtex notice of military activity off Cyprus in the eastern Mediterranean, which has been blocking passage of the Saipem 12000, Cypriot media said.
The block has been preventing the ship from reaching the area planned for exploration through a license granted by the government in Nicosia.
Nicosia has denounced the presence of the Turkish Navy in its "exclusive economic zone" as a violation of international law.
Turkey, however, does not recognise the exclusive sovereignty of Cyprus and insists on the right of the Turkish-Cypriot community to divide the island's natural resources.
In recent days, government sources in Nicosia said the Saipem 12000 wouldn't be able to remain waiting in the area if the Turkish naval block were to be extended, because it is committed to other activities planned off the coast of Morocco in the month of March.
Based on estimates by industry professionals, costs to rent the drilling ship can reach a half-million euros per day.