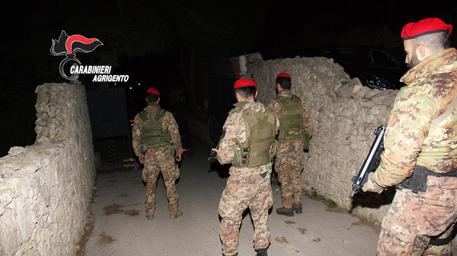 (ANSA) - Palermo, January 22 - Carabinieri police on Monday arrested 58 alleged bosses and members of Mafia clans in the Sicilian province of Agrigento, sources said.
The operation targeted the Santa Elisabetta and Sciacca clans and hit 16 Mafia 'families', the sources said. Alleged mobsters in the provinces of Caltanissetta, Palermo, Enna, Ragusa and Catania were targeted too.
The mayor of the small town of San Biagio Platani was also arrested.
Santino Sabella is accused of agreeing candidates for the 2014 local elections with the Mafia as well as exerting pressure on the allocation of council contracts.
The probe has also uncovered protection rackets against two associations running migrant reception centres in Sicily, judicial sources said.
Police said the organisation busted Monday boasted of being "the feather in the cap" of Cosa Nostra.
"The province of Agrigento is more serious, there are no longer any trustworthy or reliable Palermo people," boss Luciano Spoto was caught saying on a wiretap. "Perhaps only in Corleone are there people with their heads on straight, people who keep their word," he said.