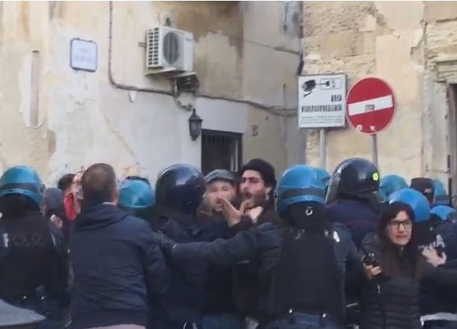 (ANSA) - Lecce, November 20 - Police on Monday clashed with protestors demonstrating against a tunnel for the TranAdriatic Pipeline (TAP) gas pipeline project in Puglia.
Demonstrators threw eggs at the police outside a conference on energy and pipelines in Lecce.
The TranAdriatic Pipeline, which has been approved by the environment ministry and by the Council of State, Italy's highest administrative court, aims to bring Caspian gas to Europe.
There have been repeated clashes over the removal of olive trees for the pipeline tunnel - despite the fact that they will be put back once work is completed. Before he became Italian premier, then Foreign Minister Paolo Gentiloni said last year that "The creation of the Trans Adriatic Pipeline is strategic for the diversification of provision sources" not just for "the EU and the Balkans" but also "for Italy".
Speaking in June at the foreign ministry in Rome during the fourth session of the inter-governmental commission on economic cooperation between Italy and Azerbaijan, Gentiloni said "after the inauguration of the project in Thessaloniki, about one month ago, a challenge has opened: seeing Azeri gas reach Italy by 2020" .
"Now we can look at new horizons", he said. The objective, recalled Gentiloni, is to boost economic and political relations between Rome and Baku, considered a "strategic regional partner".
The TAP consortium is made up of the following companies: BP (20%), SOCAR (20%), Snam (20%), Fluxys (19%), Enags (16%) and Axpo (5%).
It is set to invest 5.6 billion euros in the gas pipeline in the next few years.