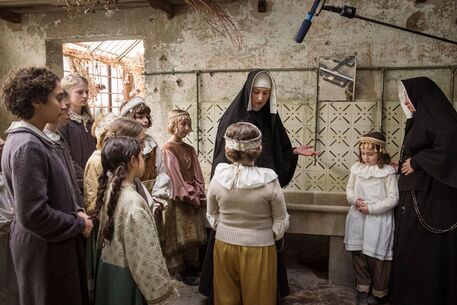 (ANSA) - ROME, JAN 24 - Italian director Alice Rohrwacher on Tuesday dedicated her Oscar nomination for her short Le Pupille (The Pupils) to the kind of naughty girls it portrays in charting teenage rebellion in a WWII boarding school.
"I dedicate the Oscar nomination to the 'naughty girls' who are not naughty at all and who are fighting everywhere in the world.
I wish that, like in my short film Le Pupille, they can break the cake and share it with each other," said Rohrwacher commenting on the nomination for the award which will be handed out on March 12.
"The girls and women in Iran, in Afghanistan but everywhere also in Sweden and Umbria," she added.
The minifilm in the Best Live Action Short nomination is a Tempest and Esperanto Filmoj production for Disney, available exclusively on Disney+.
Rohrwacher got her nomination alongside make-up artist Aldo Signoretti, for Elvis.
'Le Pupille', a WWII drama of teen rebellion in a Catholic boarding school, is among the five nominees for the live action short category, to be handed out on March 12.
It is the latest work by the 41-year-old Fiesole born director and screenwriter, who won the Grand Prix at the 2014 Cannes Film Festival for The Wonder and best screenplay at Cannes in 2018 for Lazzaro Felice.
Le Pupille (The Pupils) follows a group of rebellious young girls at a Catholic boarding school in Italy during a time of scarcity and war.
Rohrwacher has said the film is "about desires, pure and selfish, about freedom and devotion, about the anarchy that is capable of flowering in the minds of each one of them within the confines of the strict boarding school".
She added that "although the obedient girls can't move, their pupils can dance the unrestrained dance of freedom." Separately, veteran Italian make-up artist Signoretti got an Oscar nod for his work on Baz Luhrmann's biopic Elvis, the Academy said Tuesday.
Rome-born Signoretti, 69, who has three previous nominations to his name for Luhrmann's Moulin Rouge! (2001), Mel Gibson's Apocalypto (2006) and Paolo Sorrentino's Il divo (2010), was nominated for his part in the makeup and hairstyling team on the biopic about the King of Rock&Roll. (ANSA).