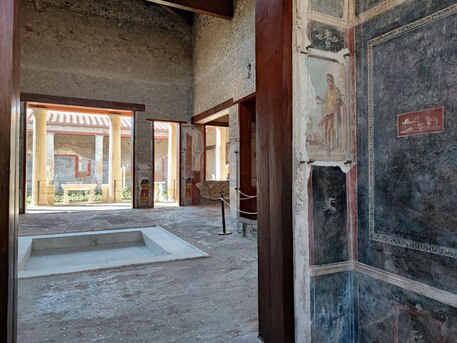 (ANSA) - ROME, JAN 10 - Pompeii on Tuesday reopened its 'Sistine Chapel', the House of the Vettii, after a 20-year restoration of famed frescos including erotic art and twelve mythological scenes plus a sumptuous garden.
Named after its owners, two successful freedmen, the Domus houses the following immortal depictions of tales from Greek myth: The Punishment of Ixion, Daedalus and Pasiphae, Dionysus Discovering Ariadne, the Death of Pantheus, the Punishment of Dirce, the Infant Herakles Strangling the Snakes, the Wrestling Match between Pan and Eros, Cyparissus, Achilles on Skyros, Herakles and Auge, Ariadne Abandoned by Theseus, and Hero and Leander.
"It's a symbolic house, a Sistine Chapel for Pompeii," the archaeological park's director, Gabriel Zuchtriegel, told ANSA at the inauguration with Culture Minister Gennaro Sangiuliano.
With its mythological scenes, erotic pictures, blending of nature and culture to enrapture the sense and the intellect, the House of the Vettii offers a kaleidoscope of colours and images which it is hard to keep your eyes off - as it was for its former slave owners and their eminent guests before the 79s AD eruption that destroyed the ancient Roman city and preserved it for humanity.
The garden, crowded with statues, fountains, sweet-scented bushes, and water features, is one of the highlights of any visit.
Closed to the public for almost two decades, here it now is again in all its refound splendour, one of Pompeii's best known and celebrated jewels, fascinating in its history and the refined nature of its various ambiences, with pictures that have been studied all over the world.
Dozens of different professions ranging from archaeologists to restorers to architects, from structural engineers to landscape gardeners, have poured their talents into a restoration that first began in 2002.
"It has been one of the most challenging and complex building sites of the last few decades," says Zuchtriegel.
Sangiuliano enthused about the reopening of the glorious treasure trove saying "Pompeii is an artistic and historical 'unicum', and its shows why Italy is such a cultural superpower".
The minister paid what he called "my most lavish and fulsome compliments" to Zuchtriegel and to the culture ministry's head of museums, Massimo Osanna, who supervised much of the restoration work.
The house is named for its owners, two successful freedmen: Aulus Vettius Conviva, an Augustalis, and Aulus Vettius Restitutus.
Its careful excavation has preserved almost all of the wall frescos, which were completed following the earthquake of 62 AD, in the manner art historians term the Pompeiian Fourth Style.
One of its other world-famous highlights is a portrayal of Priapus with his over-sized penis, a symbol of good luck, placed upon a pair of scales. (ANSA).