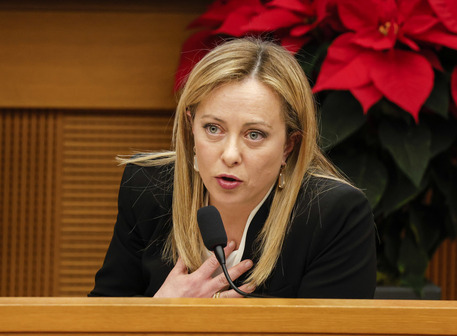 (ANSA) - ROME, DEC 29 - The Qatar-European Parliament bribery scandal dubbed Qatargate is not an Italian Job but a Socialist one, Premier Giorgia Meloni said at hey year end press conference Thursday referring to the political affiliation of the alleged protagonists.
"One one thing has made me very annoyed: many international colleagues define these facts with the phrase 'Italian job', as if it was a stain on our nation," she said.
"The affair does not concern only Italians, but also Belgians, Greeks and people from other nations. If anything, it is a party issue, a socialist job. If it had (other parties involved) it could otherwise have been a conservative job.
"It concerns a political family but not Italy. It is about defending the pride and honour of the nation I represent from attacks. "Responsibilities are transversal not between parties but between nations".
Greek MEP Eva Kaili has blamed Italian former MEP Antonio Panzeri, both members of Socialist and Democrats caucus, for the huge quantities of cash found in her home after they were both arrested this month in Belgium in relation to the so-called Qatargate scandal.
Panzeri and Kaili have been charged with corruption for involvement in alleged efforts by Qatar and perhaps other countries to condition EU affairs via bribery.
A total of around 1.5 million euros in cash has been seized by Belgian prosecutors from the homes of Kaili and Panzeri and from a suitcase in the possession of Kaili's father Kaili was removed from her position as European Parliament vice president after the scandal exploded.
Two other Italians, Francesco Giorgi, an assistant to Democratic Party (PD) MEP Andrea Cozzolino and Kaili's partner, and Niccolo' Figa' -Talamanca, the secretary general of the No Peace Without Justice NGO, have also been charged in relation to the case.
Kaili's lawyer denied media reports that the MEP, who has been in jail since December 9, had confessed to prosecutors to telling her father to hide packs of banknotes and to being aware of alleged illegal conduct by Giorgi. (ANSA).