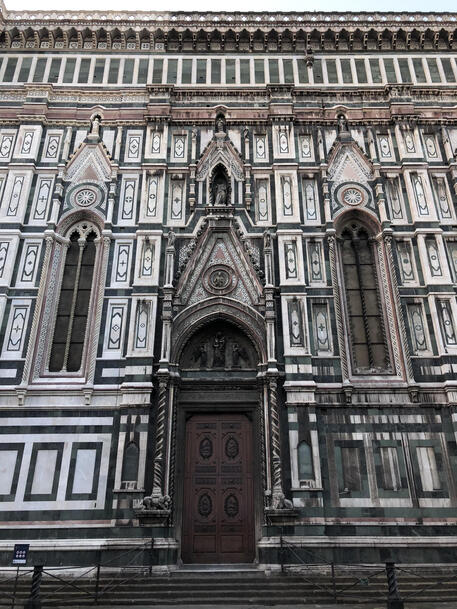 - FLORENCE, 22 NOV - Extensive traces of color were found on the Virgin with Child and Adoring Angels group of marble sculptures during restoration of the Porta dei Cornacchini and marble cladding of the northern side of the Duomo of Florence, which measures over 1,000 square meters.
The restoration, which began in Sept. 2021, confirmed that the group of sculptures had originally been multicoloured.
This is the first time, Opera di Santa Maria del Fiore noted, that such extensive traces of colours have been found on sculptures adorning the exteriors of the Florence Duomo.
During the restoration, significant deposits and signs of degradation of several different natures were removed, bringing to light decoration on the clothing of the Child, the left eye of the Virgin, and - in smaller areas - bluish green of the inside of the mantle worn by the Virgin and traces of red on the outside.
The museum has said that this sculpture group was most likely not the only one on the Duomo in polychrome, though now they appear to be marble white.
The find has led to the image of the Duomo as one in color, with white, green, and pink on the exteriors and red and gold mosaics on the facade.
"The exciting find of multiple colors of the figures on Porta dei Cornacchini of the Florence cathedral," said Duomo museum director Timothy Verdon. "It reminds us that Florence at the end of the 14th century and beginning of the 15th was a very colourful city. The cathedral also had painted statues with gilding on the wings of angels and on clothing - thus, a celebration. A celebration that we forgot and are beginning to rediscover." In the eyes of the cardinal and bishop of Florence, Giuseppe Betori, "it can seem strange that so much importance has been given to the door of a church. But, in reality. the door of a church is very important since it is the connection between what is celebrated inside the building and the normal life of people."