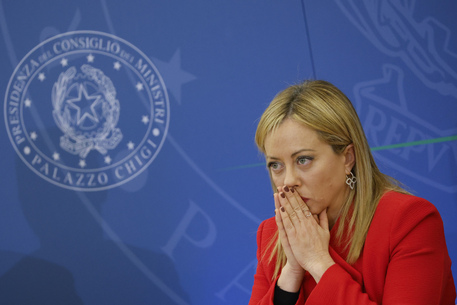 (ANSA) - ROME, NOV 22 - The 35-billion-euro budget bill that Premier Giorgia Meloni presented on Thursday features tax cuts for low earners and options to make it easier for people to take early retirement.
But the main focus was aid to help families and firms cope with soaring energy prices, which the government devoted around 21 billion euros to.
These measures include help with electricity bill payments for low-earning households, with the number of beneficiaries increased with respect to the measures passed by the previous government, and bigger tax credits for companies facing soaring energy costs.
The windfall tax on the extraordinary profits of energy companies, meanwhile, has been hiked from 25% to 35%.
The government has binned tax-disputes of up to 1,000 euros for cases that date back to before 2015 as part of a 'fiscal truce' or tax amnesty.
Deputy Economy Minister Maurizio Leo said that people would only pay back the outstanding tax in cases of over 1,000 euros, without penalties or interest and with the possibility to pay in instalments over five years.
The bill also raises the limit for cash payments from 2,000 euros to 5,000, a measure that has been criticized as potentially favoring tax evasion, a contention the government rejects.
The package cuts income tax for people earning up to 35,000 euros by two percentage points and for those on under 20,000 by three points.
"This is the measure in the budget law that cost the most, four billion euros," Meloni told a news conference.
She said this showed it was a priority for the government to "increase the salary of those who have lower incomes".
The package also raises the maximum threshold of the 15% flat tax for the self-employed for those on up to 65,000 euros a year to 85,000.
Around 1.5 billion euros go on measures to support families and encourage people to have babies.
The citizenship-wage minimum-income benefit, however, is set to be abolished for people considered fit for work at the end of next year.
The bill also makes it easier for people to retire early.
It brings in the 'Quota 103' system which makes it possible for people to start claiming their State pension at the age of 62 if they have 41 years of social-security contributions. (ANSA).