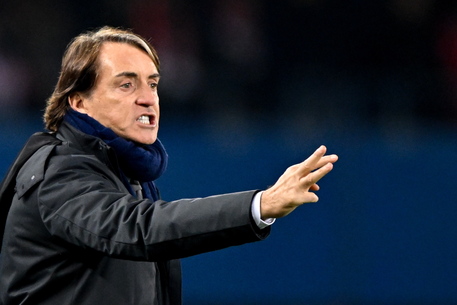 (ANSA) - ROME, NOV 21 - Italy ended its 'annus horribilis' in which it failed to qualify for the World Cup for the second time running by going down to a 2-0 defeat to Austria in a friendly in Vienna Sunday night.
The Azzurri were KO'd in the second stage of the Qatar qualification process by North Macedonia's lone strike on goal, which nestled into the corner past Gigio Donnarumma's despairing dive after Italy had peppered the opposition goal with attempts throughout the match.
They had gone into that first play-off after failing to qualify from a group after two draws with Switzerland in which two missed penalties by Chelsea's Jorginho would have given them a clear group win.
Unlikely Italian conquerors North Macedonia went on to lose 2-0 to Portugal in the final WC play-off.
Austria's goals in Vienna Sunday night came from Schlager and Alaba.
The KO at the Ernst Happel Stadion comes after a string of hopeful victories for Roberto Mancini's young and experimental side, featuring much fewer of the heroes of Euro 2020.
The Austrian's ruthlessly exposed the Azzurri's defensive frailties. (ANSA).