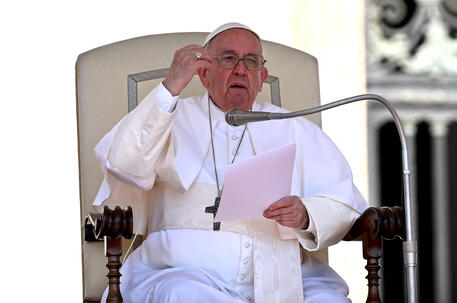 (ANSA) - ROME, JUL 21 - Pope Francis has called on States to take action to implement the Paris Agreement in his message for the annual World Day of Prayer for the Care of Creation, which is observed by the Catholic Church on September 1, the Vatican said on Thursday.
The pontiff has called for bolder action from all nations during this year's COP27 and COP15 UN summits on climate change and biodiversity.
Regarding COP27, the Pope Francis joined calls for the Paris Agreement's temperature increase goal of 1.5°C to be respected.
"The effort to achieve the Paris goal of limiting temperature increase to 1.5°C is quite demanding; it calls for responsible cooperation between all nations in presenting climate plans or more ambitious nationally determined contributions in order to reduce to zero, as quickly as possible, net greenhouse gas emissions," Francis said.
"This means 'converting' models of consumption and production, as well as lifestyles, in a way more respectful of creation and the integral human development of all peoples, present and future, a development grounded in responsibility, prudence/precaution, solidarity, concern for the poor and for future generations".
He noted that the climate crisis was a source of anxiety for young people and was hitting the world's poorest hardest.
"Exposed to the climate crisis, the poor feel even more gravely the impact of the drought, flooding, hurricanes and heat waves that are becoming ever more intense and frequent," the message read.
"Likewise, our brothers and sisters of the native peoples are crying out. As a result of predatory economic interests, their ancestral lands are being invaded and devastated on all sides, 'provoking a cry that rises up to heaven'.
"Finally, there is the plea of our children. Feeling menaced by shortsighted and selfish actions, today's young people are crying out, anxiously asking us adults to do everything possible to prevent, or at least limit, the collapse of our planet's ecosystems".
The pope also called for action to pay the 'ecological debt' incurred by the economically richer countries, which have polluted most in the last two centuries.
"In addition to determined action within their borders, this means keeping their promises of financial and technical support for the economically poorer nations, which are already experiencing most of the burden of the climate crisis," he said, referring to wealthier States. (ANSA).