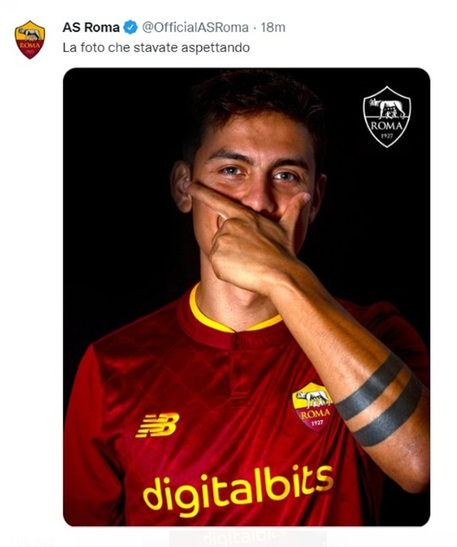 (ANSA) - ROME, JUL 20 - AS Roma announced on Wednesday that Argentina forward Paulo Dybala has joined the club after signing a contract with them that runs until 2025, with an option for an additional year.
The 28-year-old comes to the Roman side as a free agent after his contract with Juventus expired at the end of last season.
The five-time Serie A winner is set to earn up to six million euros a season, including bonuses.
He said he is looking forward to working with Roma coach Jose Mourinho.
"The speed and determination with which Roma demonstrated just how much they wanted me made all the difference," he said.
"I am joining a team that is on the up, a club that continues to put in place strong foundations for the future, and a coach, Jose Mourinho, that it will be a privilege to work with.
"As an opponent I have always admired the atmosphere created by the Roma fans - I now cannot wait for the chance to salute them while wearing this shirt." One of the most creative players in Serie A, Dybala is set to form an exciting partnership with England striker Tammy Abraham and boost Roma's hopes of winning the title.
Abraham's goals helped Roma win the UEFA Conference League in Mourinho's first season in charge. (ANSA).