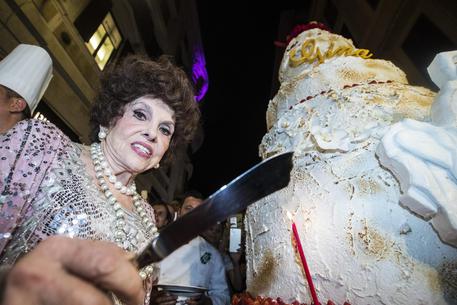 (ANSA) - ROME, JUL 4 - Screen diva Gina Lollobrigida turned 95 Monday telling ANSA she was determined to stay creative with the photography and art projects she turned to after her decades as a sex symbol.
The 'Bersagliera' of Italian cinema, after an iconic feisty role, said "my birthday is a nice milestone and I'm still working.
"I'm preparing a book (of drawings) filled with sanguines (a red flower), sketches in red ochre, it's an important work, demanding." The cinema goddess, dubbed the world's most beautiful woman after a 1955 hit film with Vittorio Gassmann, added "perhaps I've been spoiled but I'm still working constantly, I feel as if I still have a lot to say and I hope I get the time to achieve everything I want to".
Speaking over a heart-shaped cake topped with strawberries, she added "I fell very loved, and I'm rather excited because there are very many people who want to celebrate my birthday".
Lollobrigida last appeared in public on November 21 when she broke down in tears on Italian TV's flagship Sunday afternoon variety show over a long battle over her estate pitting her against her son and grandson after she wrote her former butler into her will.
"I have a right to live and die in peace" sobbed 'La Lollo', detailing her battles against son Milco Skofic and grandson Dimitri after she said she was leaving longtime helper Andrea Piazzolla much of her money.
The host of the Domenica In programme, Mara Venier, tried to comfort the former star saying "Come on, I've never seen you so low, remember you're the Bersagliera," referring to her well-loved feisty film character.
But the diva, once voted the most beautiful woman in the world and long a rival for that title with countrywoman Sophia Loren, said she felt "humiliated" by the family inheritance spat and "(didn't) think I can get through this".
Last October the supreme Court of Cassation confirmed that Lollobrigida needs a legal guardian to stop people preying on her wealth.
The former bombshell's son, Skofic, whose relations with his mother have always been difficult, had asked the court to name a guardian to protect her estate.
The Cassation Court said La Lollo was not mentally infirm but medical experts had found "a weakening in her correct perception of reality" and a state of "vulnerability" that would make it possible for predatory people to gain sway over her.
Lollobrigida, whose glittering career started in 1947, said through her lawyers that she was "disappointed but not resigned" at a verdict she said injured her dignity.
In 1955 Lollobrigida starred in the film called La Donna Piu Bella del Mondo (The World's Most Beautiful Woman), which became her signature movie.
The daughter of a furniture manufacturer from a mountain village outside Rome, Subiaco, she made over 60 films including some during the 1990s.
Since retiring from the cinema Lollobrigida has tried her hand as a photographer, sculptor, photojournalist and a fashion and cosmetics executive.
The diva was divorced in 1971 after a 22-year marriage to a Yugoslav doctor, by whom she had her son.
In 2006, at the age of 79, she married a Spanish property entrepreneur 34 years her junior whom she had known for 22 years, but the marriage was soon annulled by a Vatican court.
In recent years increasing physical and mental fragility has kept her out of the public eye.
A sloe-eyed, buxom brunette, La Lollo's Hollywood breakout role came in the John Huston film Beat the Devil (1953). In 1961 she won a Golden Globe with Come September co-starring Rock Hudson.
With her earthy good looks she embodied the prototype of Italian beauty. Her distinctive short hairdo was especially influential. It quickly spread across Italy in the sixties and was referred to as the "lollo".
"I've had many lovers and still have romances. I am very spoiled. All my life, I've had too many admirers," she said in an interview in 2000. (ANSA).