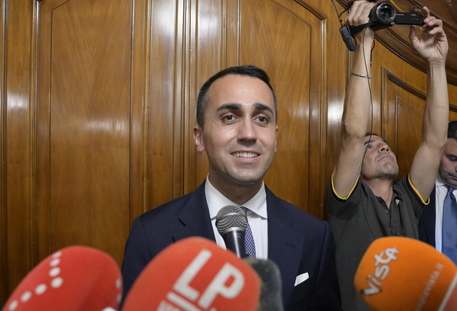 (ANSA) - ROME, JUN 22 - Foreign Minister Luigi Di Maio has said he is leaving the 5-Star Movement (M5S) to form a new group, taking around 70 lawmakers with him, after a big bust-up with M5S leader and ex-premier Giuseppe Conte.
Announcing the split on Tuesday night, Di Maio accused the M5S of undermining the government's position on giving military aid to Ukraine following the Russian invasion after Conte said Italy should not send any more weapons to Kyiv.
The minister said the M5S's stance risks jeopardizing Italy's pro-NATO position and argued that stemmed from a failed attempt to boost the movement's lagging support in the opinion polls.
Conte has said sending more weapons risks prolonging the conflict and the suffering.
Conte's spokesman said the breakaway will turn out to have a "boomerang" effect for Di Maio.
Some analysts have suggested that the fact the M5S has a limit of two mandates for its elected officials, which is set to kick in for Di Maio and many other M5S MPs, was a factor in the split.
Indeed, the Di Maio said the M5S principle that all members are equally important no longer held.
The tension between Di Maio and Conte seems to date back to when the former helped thwart a plan the latter had hatched with League leader Matteo Salvini to have intelligence service chief Elisabetta Belloni elected president earlier this year.
The failure of Italy's political parties to agree on a new head of State led to President Sergio Mattarella reluctantly agreeing to be re-elected. (ANSA).