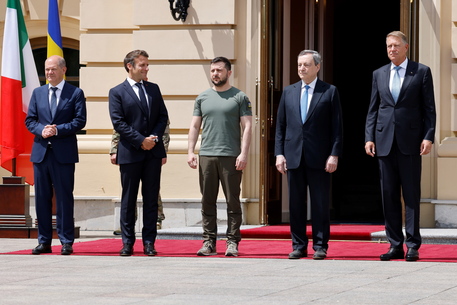 (ANSA) - ROME, JUN 16 - Italy wants Ukraine in the EU, Premier Mario Draghi told a press conference in Kyiv after meeting President Volodymy Zelensky with French President Emmanuel Macron and German Chancellor Olaf Scholz to show support after Russia's invasion Thursday.
"The most important message of our visit is that Italy wants Ukraine in the EU, it wants it to have the status of candidate and it will maintain this position in the upcoming European Council," said the Italian premier.
"Zelesnky knows that it is a road to be travelled on, not only a step".
Draghi added that the EU wanted peace but Kyiv must be able to defend itself from Moscow's aggression.
"In Irpin I felt horror and hope, hope for reconstruction and the future," he said after visiting the heavily bombed town near the Ukrainian capital.
"We are here today for this, to help Ukraine rebuild its future.
"We want peace but Ukraine must defend itself and it is Ukraine that must choose the peace it wants, that which it deems acceptable for its people.
"Only that will be a lasting peace".
Draghi added that it would take two weeks to de-mine Ukrainian ports to allow the export of precious grain as well as humanitarian corridors.
"There are two weeks to de-mine the ports. The harvest will arrive at the end of September and a series of ever more urgent deadlines will inexorably take us closer to a dramatic situation.
"We must create safe corridors with the utmost urgency for grain and to avert a catastrophe.
"The only way is a UN resolution regulating navigation in the Black Sea, which Russia has so far refused".
Draghi also said Italy would back an investigation of suspected Russian war crimes.
"We have seen the atrocities committed by Russia in this war at Irpin, which we condemn without hesitation.
"We give our complete support to the investigations on war crimes".
Zelensky thanked the three European leaders for their solidarity, but stressed: "now we need heavy weapons" to fend off a Russian advance in the eastern Donbass region.
Scholz said the Ukrainian president had accepted an invitation to take part in an upcoming G7 meeting.
Soon after arriving in Kyiv the leaders visited Irpin, where a key battle took places in the early stages of the war and hundreds of civilians were killed.
"The world is on your side," Draghi told officials in Irpin.
Draghi said "Irpin is a place of destruction but also of hope".
He said "the Ukrainians will rebuild everything".
Macron said that sooner or later the Ukrainian government will have to negotiate with Moscow. But he also said that Kyiv must win the war.
Former Russian President Dmitry Medvedev said "the fans of frogs' legs, liverwurt and spaghetti are visiting Kyiv with zero usefulness". (ANSA).