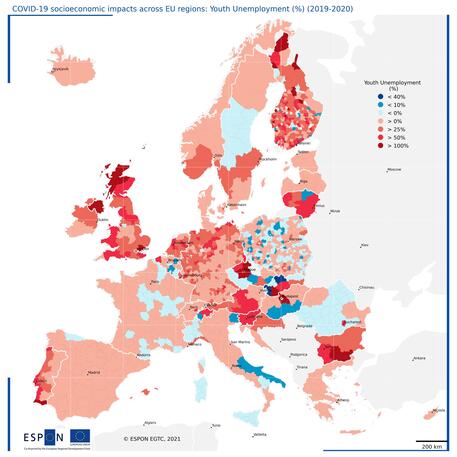 (ANSA) - ROME, MAY 13 - Young people were the main victims of the economic and social crisis triggered by the COVID-19 health emergency, paying a disproportionately high price in terms of unemployment or greater job insecurity, and mental-health problems, according to an EU study.
The preliminary version of the Geography of Covid study, conducted by the ESPON European cooperation programme specialized in regional analysis, said that youth unemployment in the EU's regions increased by 21.81% with respect to pre-pandemic levels.
It said the young people most at risk of losing their jobs were employed in the sectors affected most by the restrictions imposed to combat the spread of COVID, such as hospitality, restaurant and accommodation services, and wholesale and retail trade.
The researchers observed that, as a result, the local economies based mainly on these sectors registered major increases in youth unemployment rates.
The EU States present a mixed picture, with Slovenia, Lithuania and Bulgaria registering the biggest increases in youth unemployment rates, at 76.8%, 68.5% and 63.2% respectively.
Furthermore, the study showed that the greatest variations were found within the countries themselves.
Regions with a vocation for tourism were hit hard and registered major increases in youth unemployment during the pandemic.
Indeed, young people working in the tourism sector often have short-term contracts that make them more vulnerable to being dismissed.
It also became more difficult for new graduates to enter the labour market, a phenomenon that could be seen especially in the big cities that are often home to universities.
The research showed that local authorities implemented social-support initiatives to help disadvantaged segments of the population, those considered most exposed to the social and economic crisis during the pandemic, including young people, women, children and the homeless.
In addition to leading to higher youth unemployment, the health emergency also led to an increase in the number of NEETs, people not in employment, education or training, especially in the 15-to-29 age group.
Furthermore, young workers were also affected by a moderate increase in the rate of people at risk of poverty in half of the EU's countries.
According to a survey conducted by Eurofound in the spring of 2021 that was cited in the study, almost two-thirds of youngsters aged 18 to 34 were at risk of depression, with the deterioration in mental health being particularly acute among those who had lost their jobs. (ANSA).