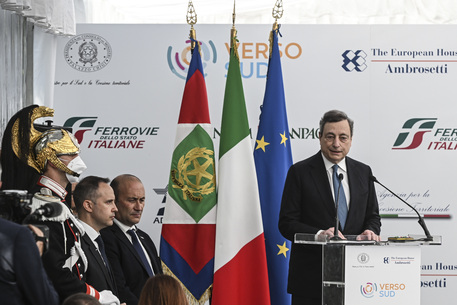 (ANSA) - ROME, MAY 13 - Premier Mario Draghi said Friday that Italy's less wealthy southern regions have a key role to play in the process of diversifying energy sources as the nation seeks to end its reliance on Russian gas and boost renewables to do its bit to combat the climate crisis.
"The war in Ukraine has shown the danger of our dependence on Russian gas," Draghi told the 'Verso Sud' forum organized by Minister for the South Mara Carfagna.
"Italy has moved with the utmost speed to diversify gas supplies and it continues to do so.
"The South is central.
"At the same time we are accelerating with the development of renewable energy to improve the sustainability of our model of production".
Italy imports almost all of its gas and 40% of those imports come from Russia.
The government recently signed agreements with Algeria, Angola and the Republic of Congo to boost gas supplies from them, amid fears supplies from Russia could be cut off.
Other deals have been or are in the process of being made with Egypt, Libya and Mozambique.
Italy has supported Western sanctions on Russia following its invasion of Ukraine and said it will not veto an embargo on gas imports if it comes to this. (ANSA).