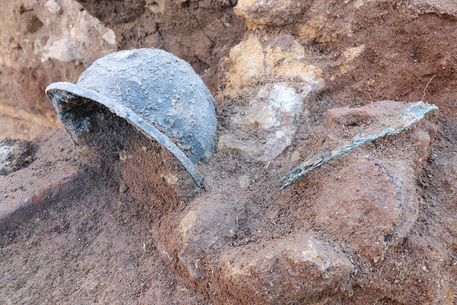 (ANSA) - ROME, FEB 1 - Helmets and weapons from the famed 6th-century BC naval Battle of Alalia,  the first major sea battle in history where the Greeks scored a Pyrrhic victory over the Etruscans and their Carthaginian allies, have been found in a new dig at Velia near Paestum south of Naples, birthplace of the distinguished Greek philosopher Parmenides, ANSA can reveal in an exclusive.
The walls and remains of the most archaic temple were found, dating back to the sixth century BC, with painted ceramics and a hoard of weapons including two helmets, one of them Etruscan and likely taken from their enemies at the Battle of Alalia in Corsica, which saw the Greek Phoecians attacked by Carthaginian and Etruscan ships and resulted in a strategic victory for the joint forces as the Greeks evacuated Corsica, which was captured by the Etruscans, while Carthage maintained its hold on Sardinia.
These are the surprising results of an excavation at the Velia archaeological park, which ANSA has had a sneak peek at.
The director general of Italian museums Massimo Osanna said it "sheds fresh light on the history of the powerful Greek colony".
Culture Minister Dario Franceschini said the find highlighted the "importance of continuing to invest in research". (ANSA).