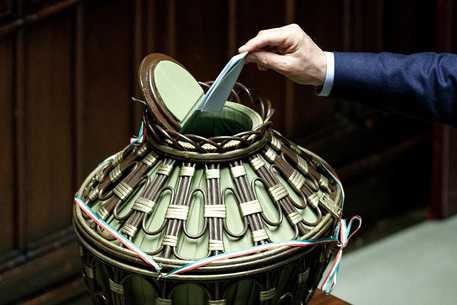 (ANSA) - ROME, JAN 26 - The third ballot in Italy's presidential election on Wednesday was inconclusive, like the first and second were.
The number of votes in favour of President Sergio Mattarella being re-elected increased with respect to the first two ballots, climbing to 125.
With the fourth ballot on Thursday, however, the chances of success go up as the number of 1,009 grand electors - lawmakers from both houses of parliament and regional representatives - needed to elect a new head of state goes down from two-thirds to a simple majority of 505.
On Tuesday the parties of the centre right - the League, Silvio Berlusconi's Forza Italia (FI) and the Brothers of Italy (FdI) party - proposed three possible candidates: former education minister and ex-Milan mayor Letizia Moratti, former prosecutor Carlo Nordio and former Senate Speaker and philosopher Marcello Pera.
Enrico Letta, the leader of the centre-left Democratic Party (PD), politely said no to those names and suggested the party heads hold a sort of conclave, locking themselves in a room and having only bread and water until they agree on a new president.
FdI leader Giorgio Meloni said she would not take part in any such meeting and her party split with the rest of the centre right in the third ballot and voted for FdI member Guido Crosetto, rather than casting blank papers, after the other groups rejected the proposal to vote for Nordio.
Crosetto got 114 votes, so support for him went beyond FdI's 63 grand electors, while former Lower House Speaker and centrist politician Pierferdinando Casini got 52.
There is speculation that the centre right actually want to push for Senate Speaker Elisabetta Casellati to become Italy's first woman president.
The PD, however, contacted the League to try to convince Salvini's group not to vote for a centre-right candidate, rather than seeking a consensus figure, saying this could rock the stability of the broad majority supporting Premier Mario Draghi's executive. (ANSA).