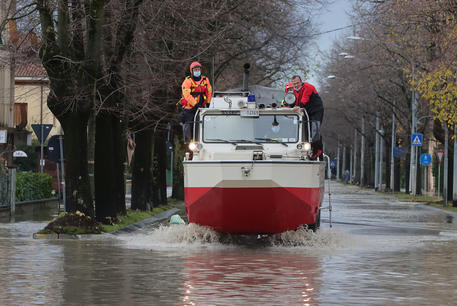 (ANSA) - ROME, NOV 23 - The number of extreme-weather events registered in Italy is increasing significantly every year as the climate crisis escalates, according to the Osservatorio CittàClima 2021 report released on Tuesday by environmental association Legambiente.
It said 1,118 extreme-weather events took place in Italy between 2010 and November 21 2021.
It said 133 of those took place over the last year, an increase of 17.2% with respect to the number given in last year's report.
It said 602 towns and cities had been hit hardest by these events and that they had claimed 261 lives, including nine in the first 10 months of this year.
The report, compiled with the help of the Unipol insurance-banking group and the scientific input of the Enel Foundation, said Rome was the worst-hit city, followed by Bari and Milan.
"The scenario of intensification of extreme-weather events described by the new Osservatorio CittàClima report obliges our country to take decisions that can no longer be postponed in order to stop the impacts being even more significant," said Legambiente Vice-President Edoardo Zanchini.
"The map and data of the CittàClima report highlight the fact that not all areas of the country are the same with respect to these phenomenon, and in some areas of the country these events occur with greater intensity and create more damage.
"So the adaptation policies should be a priority... we must valorize the systems of analysis, the skills and the technologies that we have to monitor the impacts and to understand how to rethink the spaces within cities in order to make people safe and take the opportunity to make the cities better places to live". (ANSA).