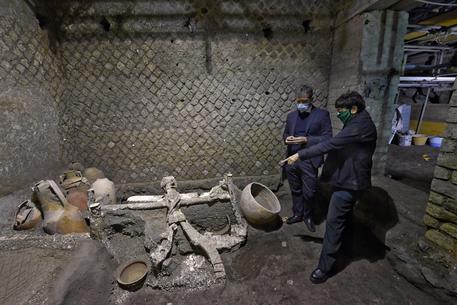 (ANSA) - ROME, NOV 6 - (by Silvia Lambertucci) Three beds of string and wood with evident signs of the matting that covered them, the chamber pot still beside the beds, while all around the space is occupied by work tools, the helm of the cart that was just outside, the horses' tack, and large piles of amphorae.
On the outskirts of Pompeii, the large suburban villa of Civita Giuliana has yielded back the little room occupied by stable slaves, perhaps a small family, still incredibly intact with all their poor accoutrements.
A sort of snapshot of the end that ANSA has been able to see in a sneak preview and which shines a light on the lives of the lowest members of the affluent Roman colony buried by Vesuvius in 79 AD. "An exceptional find, because it is truly rare for history to give back the details of these lives," says an enthusiastic director of the archaeological park, Gabriel Zuchtriegel. At Pompeii we are accustomed to the luxury of the frescoed rooms, the marvels of the triclinia, the refined art of the atriums and gardens.
Here, on the other hand, in the bare few metres of this dingy space, a few paces from the stable that housed the superb chestnut stallions of the master of the house, the raw reality of things hits you with the harshness of its squalor, like a blow to the stomach.
"We must thank the particular dynamics of the eruption, since the room stayed intact until the arrival of the pyroclastic flows, the portico held up, the lapilli stopped before the threshold," says the director.
A living space that was miraculously preserved intact, and only later profaned by the picks of the tomb raiders who came in looking for other treasures.
The holes they left in the walls are the memory of the wounds inflicted on the history of this imposing suburban estate before prosecutors from Torre Annunziata stopped the desecration and the excavations began, which are now aiming to bring the place back into the light.
Even the beds of the slaves, reconstructed with startling accuracy from the plaster casts, sadly bear the signs of that ferocious invasion.
"But we are planning to fill in the gaps", says Zuchtriegel. In the room, the three bunks are arranged in a horseshoe and are of varying size, the smallest, no longer than a metre and 40 centimetres, destined for a child. The appearance is that of essential, extremely simple pieces, "more bunks than beds," says the director.
They were skillfully built, however, according to a modular system that enabled them to lengthen or shorten the bed depending on the height of the slsves who slept in them, akin to an IKEA model for the ancient world.
No mattresses, just a piece of fabric laid over a network of ropes which the plaster cast has restored to light with sharp precision.
And nothing like the beds of the masters, which were always fitted with a board and a soft mattress.
The walls are bare, no colour apart from a blotch of white paint up high, below the small window, where a lamp was hung.
"It probably served to amplify the light produced by the fire," hazards Zuchtriegel.
Beneath one bed you can see a sort of basket, perhaps for the few personal effects of the slaves, and also a small jug.
Who knows, perhaps it contained water for the night, or perhaps something else, we'll find out in the laboratory, says archaeologist Luana Toniolo, "when all the jugs, amphorae and vases piled up alongside the beds will be analyzed in order to find out what they contained".
The many work tools deserve separate mention: lying on the child's bed there is the large helm of the cart, it was wooden but the plaster cast has reproduced on one side of the fork a large piece of stitching done with twine.
In the centre of the space, on the other hand, there is a large box with metal corners which contained the horses' tack, wrapped in a piece of cloth.
Zuchtriegel nods his head, it is a unique area, he repeats, "it recounts situations of discomfort, of precariousness that we can recognize".
That is one more reason to continue the digs and "to investigate the villa in its entirety," says the director general of museums, Massimo Osanna.
Belonging perhaps to a general, perhaps a high-ranking magistrate, the Villa of the Harnessed Sorrel, as some people have already dubbed this property, has been compared in size and splendour to the Villa of Mysteries, with a residential space of great luxury, sweeping terraces that looked out onto the bay, and a major productive area.
The digs have already brought to light items of huge interest, ranging from the stable with the magnificent harnessed horses to the dazzling ceremonial chariot or carriage, the room decorated with flowers that housed the little Mummy, perhaps one of the daughters of the owners, and also the bodies of two fugitives who died on the house's steps.
"The goal is to open it to the public," says Zuchtriegel.
The tomb raider, whose house is on top of the Roman villa, has been convicted and the Park has already initiated the expropriation of the land that will serve to continue the excavation.
It will take time to complete, but it is worth the effort, stresses the director, adding that "the new visitors' circuit will also help boost the re-evaluation of the local area".
(ANSA).