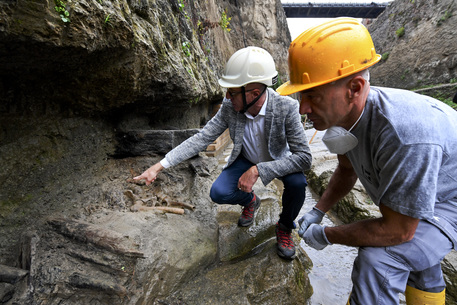 (ANSA) - ROME, OCT 15 - Archaeologists have made what Culture Minister Dario Franceschini described as a "sensational" new find at Herculaneum, the partially mutilated skeleton of a 40-45-year-old man whom the avalanche of fire and gas from Vesuvius stopped at a mere step from the sea and the mirage of salvation, Archaeological Park Director Francesco Sirano has told ANSA in an exclusive, 25 years after the last digs at the ancient Roman town buried by the volcano.
The discovery may shed fresh light on the last moments of life of the town a few kilometres from Pompeii, Sirano said.
"It's a find from which we expect an awful lot," he said.
Franceschi said "this is a sensational discovery".
He said "the sensational discovery of the remains of a fugitive at the archaeological site of Herculaneum is great news, first of all because the find is due to the resumption in this place, after almost 30 years, of scientific excavations conducted by the ministry's technical staff.
He underscored that "the fascinating hypotheses surrounding the mystery of the death of this last discovered victim of the 79 AD eruption are now in the hands of experts, who can rejoice at this result which is also due to the support of the Packard Humanities Institute".
The stage for this latest find is the ancient town's former beach, the same place where, during the last systematic digs in the 1980s and 90s, digs found, piled up in the small stores facing the ancient sand, the remains of over 300 fugitives who sought shelter while awaiting a possible rescue by the fleet of Pliny the Elder.
The new digs, which saw the park's archaeologists working for weeks, are linked to the setting up a of a new path that will enable visitors to reach the monumental Villa of the Papyri by retracing the ancient seafront walk, the only completely preserved seafront of a Roman city.
The remains of the man, a middle-aged person that the initial anthropological tests have said was 40-45 years old, were found at the base of the extremely high lava stone wall that today closes the ancient seafront.
He was lying with his head pointing back in the direction of the sea and surrounded by heavy carbonized wood, including a roof beam that could have crushed his skull.
The bones are of a bright red colour, which is "the mark of the stains left by the victim's blood," the archaeologist says, explaining that this is a consequence of the unique process of combustion caused in Herculaneum by the flow of magma, ash and gas belched out by Vesuvius.
"The last moments here were instantaneous, but terrible," stresses Sirano.
"It was one o'clock at night, when the pyroclastic surge produced by the volcano reached the town for the first time with a temperature of 300-400 degrees, or even, according to some studies, 500-700 degrees.
"A white-hot cloud that raced towards the sea at a speed of 100 kilometres per hour, which was so dense that it had no oxygen in it." This inferno "in the space of a few minutes engulfed and swallowed up the upper part of the town, uprooting the roofs and mowing down men and animals with a heat such as to make their bodies evaporate".
It was, for the man who has just been found, an awful death, which "he must have seen face to face", perhaps after turning around to seek the reason for that deafening roar he heard behind him or for the light that suddenly pierced the blackness of the night, Sirano says, adding that together with the experts of his team, including professionals made available by the Packard Humanities Institute (which has also come up with the plans to preserve the area), he is now wondering about the identity of this new victim and the role he played in the final moments of the town.
One thing is sure: he was not sheltering with all the others who were crammed into the fishermen's store rooms.
"He may have been a rescuer, a companion of Pliny's officer who was found in the 80s about 20 metres from this point, again on the beach." he says.
A soldier, therefore, who was perhaps rigging a launch to take a first group of people out to safety at sea. "Or one of the fugitives, who left the group to reach the sea hoping to embark on one of the rescue launches, even perhaps the last and most unfortunate of a group that had managed to set out to sea", says Sirano.
There are many hypotheses at the moment, even that the poor man was watching out for the rescue ships, seeing that Pliny the Younger (nephew of the great admiral and scholar who lost his life in the 79 AD eruption) says that his uncle's armed quadriremes were forced to give up on docking at the last minute, stopped by a sudden deterioration in the situation.
Whatever the truth, in order to understand more of what actually happened, the skeleton will now be removed with the help of special metal blades together with a bigger portion of the lavic rock in which it is set, and the excavation will continue in the laboratory.
The first in situ examinations, meanwhile, have revealed traces of what appear to be fabric and metal around the skeleton.
"It may have been a bag with his work tools, but also weapons or coins," says Sirano.
There is a great deal of curiosity, also because with respect to 25 years ago the investigative techniques and tools have evolved to a great degree.
"Today we have the possibility of understanding more," explains the archaeologist.
Having remained for centuries under a rock wall more than 26 metres high, the poor fugitive could well add new details to the story of that fateful night. (ANSA).