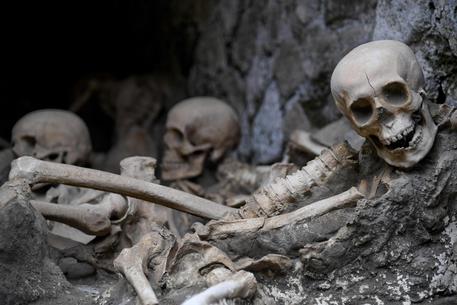 (ANSA) - ROME, OCT 15 - Archaeologists have made what Culture Minister Dario Franceschini described as a "sensational" new find at Herculaneum, the partially mutilated skeleton of a 40-45-year-old man whom the avalanche of fire and gas from Vesuvius stopped at a mere step from the sea and the mirage of salvation, Archaeological Park Director Francesco Sirano has told ANSA in an exclusive, 25 years after the last digs at the ancient Roman town buried by the volcano.
The discovery may shed fresh light on the last moments of life of the town a few kilometres from Pompeii, Sirano said.
"It's a find form which we expect an awful lot," he said.
Franceschi said "this is a sensational discovery".
He said "the sensational discovery of the remains of a fugitive at the archaeological site of Herculaneum is great news, first of all because the find is due to the resumption in this place, after almost 30 years, of scientific excavations conducted by the ministry's technical staff.
He underscored that "the fascinating hypotheses surrounding the mystery of the death of this last discovered victim of the 79 AD eruption are now in the hands of experts, who can rejoice at this result which is also due to the support of the Packard Humanities Institute". (ANSA).