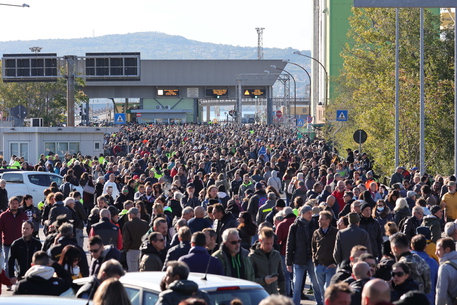 (ANSA) - ROME, OCT 15 - There were widespread protests and strikes in Italy Friday as the Green Pass health pass came into force in all Italian workplaces.
There was disruption at three of Italy's six main ports.
The Green Pass shows that a person is vaccinated for COVID-19, has recovered from it or has tested negative in the last few days.
As of Friday the pass, which had been required for restaurants, cinemas and gyms, is mandatory for all workplaces in both the private and public sector.
In Trieste, some 2,000 dockers protested against the pass in a port expected to be brought to a standstill by the demonstrations.
But Friuli Governor Massimiliano Fedriga said the port was "working regularly".
In Genoa, dockers halted operations at a major loading point but lorries headed for other points and a long tailback was eased.
In Ancona, access to the port was blocked by a workers' sit-in.
But dockers worked normally in Venice, Naples and Palermo.
Meanwhile dozens of anti-pass protesters tried to block traffic in Rome, with varying degrees of success. Many of them were stopped by police.
Strikes hit several major firms including Electrolux, San Benedetto and Zoppas.
The Green Pass is the strictest vaccine mandate to be issued by any country.
Protests against it turned ugly in Rome last Saturday with a neofascist-led mob ransacking the headquarters of Italy's largest and most leftwing trade union. (ANSA).