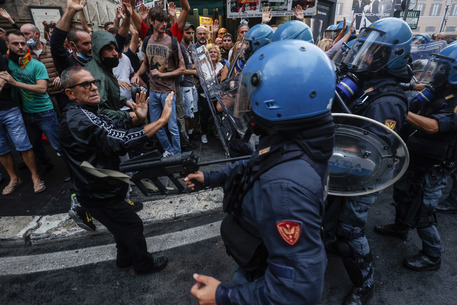 (ANSA) - ROME, OCT 11 - Calls for Forza Nuova to be banned continued on Monday after members of the far-right party, including leader Roberto Fiore, were among 12 people arrested in relation to violence that broke at a protest in Rome on Saturday against the Green Pass COVID-19 vaccine passport.
Police had to use tear gas and water cannons during the demonstration and the shocking scenes included a raid in which the headquarters of trade-union confederation CGIL were ransacked.
"Forza Nuova must be urgently dissolved on the basis of the Constitution and the Scelba and Mancino laws (against Fascism)," said Valeria Fedeli, a Senator for the centre-left Democratic Party (PD) and a former education minister.
"The PD is going to present a motion in the Senate in the next few days requesting that this be scheduled and voted on as soon a possible.
"The events of last Saturday, with the squadrista attack on the CGIL's national headquarters coordinated and carried out by representatives of a Neo-Fascist organization like Forza Nuova, take us back to the darkest and most dramatic moments of our history and they are an extremely serious and unacceptable attack on democracy".
After the demonstration a group of around 30 protestors raided the emergency room of Rome's Umberto I hospital, where one of the participants had been taken.
Four people were injured, two police officers and two health workers, including a nurse who was hit with a bottle in the head, said Lazio Health Chief Alessio D'Amato.
Police have identified around 600 people who took part in the violent protests after studying video footage.
Dozens of officers were hurt.
PD President Valentina Cuppi, meanwhile, has launched a petition via Change.org calling for all of Italy's far-right parties to be banned.
"It is time to say no more Fascist, squadrista violence," said Cuppi, who is also the mayor of Marzabotto, a town near Bologna where hundreds of civilians were murdered in a Nazi atrocity in World War II.
Cuppi named Forza Nuova, CasaPound, Lealtà Azione, and Fiamma Tricolore among the parties she thinks should be banned.
Forza Nuova, however, remained unapologetic after the rioting.
"The popular revolution will not stop its path, with or without us, until the Green Pass if definitively withdrawn," a statement read.
"Saturday was a watershed between the old and the new.
"The people decided to raise the level of the clash".
The Green Pass, which shows that a person is vaccinated for COVID-19, has recovered from it or has tested negative in the last few days, will be obligatory for all Italian workplaces as of Friday. (ANSA).