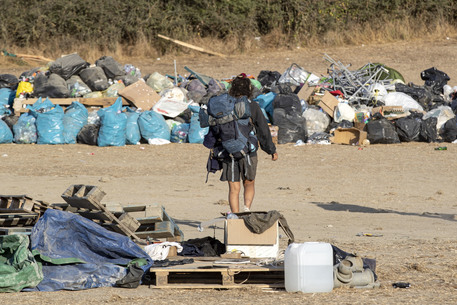 (ANSA) - ROME, AUG 19 - A huge illegal rave party that brought young people from across Europe to a country site straddling Lazio and Tuscany was broken up Thursday leaving piles of waste, at least three alcohol-induced comas and one drowning death in its week-long wake.
Two people were taken to hospital Thursday in a gave state of agitation after the rave.
Police from the nearby city of Viterbo put an end to the revels after identifying over 2,000 people.
"The area has been liberated," said the mayor of the nearest town, Valentano, Stefano Bigiotti.
"There is no longer anyone at the site.
"I can only express satisfaction.
"(Interior) Minister (Luciana) Lamorgese, who personally contacted me yesterday afternoon, kept her promise to free the area by today.
"The operations were carried out with the utmost respect for persons.
"Now they are already at work to remove the rubbish left at the site as soon as possible".
The Viterbo police HQ said two vans with acoustic equipment aboard had been seized, one belonging to two Dutchmen and the other to two Italians.
Viterbo's provincial public order panel asked the interior ministry to wind up the rave party.
The unauthorized event, which had attracted young people from across Europe, had been going on in the countryside at Valentano since Friday night.
"The situation is out of control, no negotiation is possible, public order must be restored, people identified and the responsibility for such a gathering established," said Lazio regional health councillor Alessio D'Amato.
Viterbo prosecutors, meanwhile, opened a probe into the death of a 25-year-old man at the rave.
The man, born in London but resident in the north of Italy, was found dead in a lake near Viterbo Monday after taking part in the massive event.
The man's body was found in Lake Mezzano. He had been seen going into the lake Sunday night and not coming out again.
The interior ministry said Wednesday that police were working to "restore legality" in the area. (ANSA).