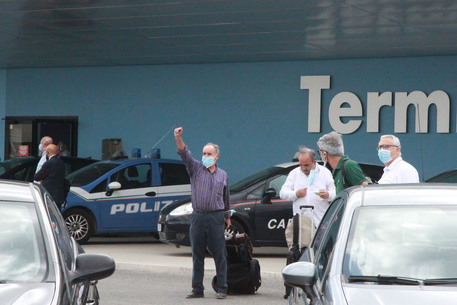 (ANSA) - ROME, AUG 18 - Some 85 Afghan former assistants to the Italian mission in Afghanistan left for Rome on the second Italian airlift flight for those at risk of Taliban reprisal Wednesday, after 20 were brought out on Monday.
A further 150 are set to depart from Kabul later Wednesday, on board two more flights.
"Our commitment," said Defence Minister Lorenzo Guerini, "is to work with the utmost effort to complete the evacuation plan for Afghan collaborators, of activists and others exposed to danger".
An Italian air force C130J will bring the first 85 Afghan ex-mission workers and relatives to Kuwait, where they will be transboarded onto a KC767.
Another two C130Js will make the same round trip from Kuwait later Wednesday and the 150 or so people will fly on to Rome on another KC767.
The Italian air force has deployed seven aircraft for the Aquila Omnia Operation: three KC767s that will shuttle between Kuwait and Rome and four C130Js that will operate the airlift from Kabul to Kuwait. (ANSA).