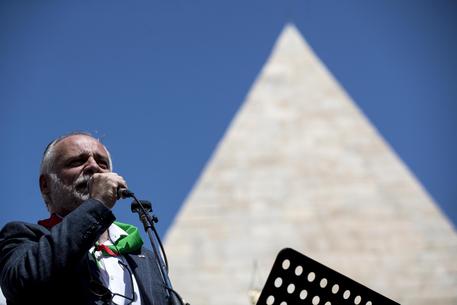 (ANSA) - ROME, AUG 13 - Andrea Santucci, a firefighter and former councillor for the League party in the town of Colleferro, near Rome, has caused outrage by proposing naming a Rome square after Adolf Hitler.
Santucci said he was in favour of renaming Rome's Piazzale dei Partigiani (Square of the Partisans) after the Nazi dictator.
"The proposal to name Piazzale dei Partigiani after Adolf Hitler is unacceptable and shameful," said Rome Mayor Virginia Raggi via Twitter.
"Rome is a proudly anti-Fascist city. We will never permit such madness".
Italian Partisans Association ANPI said Santucci should be prosecuted.
"Those words are despicable and I fear that the person who said them does not even feel shame," Fabrizio De Sanctis, ANPI's chief in the province of Rome, told ANSA.
"I don't think it is the midsummer heat but the arrival of the election campaign (for local elections) that brings out these fascists.
"It is intolerable. He must be charged with apology of Fascism".
Economy Undersecretary Claudio Durigon, meanwhile, has been resisting calls to quit after the League MP called for a park in his home city, Latina, to be renamed after Arnaldo Mussolini, the brother of Fascist dictator Benito Mussolini.
The park is currently named after Giovanni Falcone and Paolo Borsellino, two anti-mafia prosecuting magistrates who were murdered by Cosa Nostra in 1992.
Photo: Fabrizio De Sanctis. (ANSA).