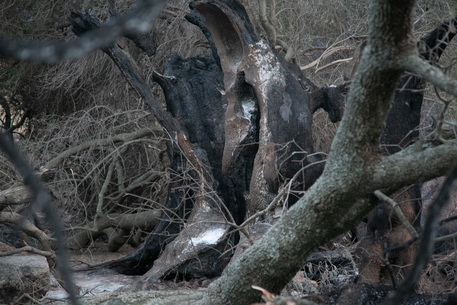 (By Alessandra Briganti) (ANSA) - BRUSSELS, JUL 29 - In addition to the COVID-19 pandemic, the summer of 2021 will also be remembered for extreme events such as heatwaves, wildfires and floods which experts say are the effect of climate change caused by greenhouse-gas emissions.
According to the 'Climate' study of the ESPON EU research programme, which specializes in regional analysis, southern Italy is one of the areas of Europe most exposed to climate change, along with Spain and Portugal in the west and Bulgaria, Romania and Poland in the east.
The study started with the analysis of the exposure and sensibility to climate change of each of Europe's regions.
The researchers explained that sensibility depends on a combination of a region's physical, environmental, social, cultural and economic characteristics.
Both of these elements, exposure and sensibility, contribute to determining the impact of climate change on a region.
This, in turn, can be combatted by a given region's capacity to adapt via, for example, the construction of dams.
The study explained that the result of these variables gives the potential vulnerability of a given region.
So Iceland, Norway, Switzerland and Liechtenstein are considered to be of "low or marginal vulnerability", in part because of their relatively high adaptation capacity.
Developed areas such as north Italy, France, Austria, Belgium, the United Kingdom and the Netherlands, on the other hand, have an "at least average vulnerability", as shown in part by the recent disasters caused by extraordinary rainfall.
The researchers observed that, in general, the impact of climate change in metropolitan European regions will tend to be high because of the high concentration of population, infrastructure and cultural heritage, as well as the fact that these areas often feature rivers or are along the coast.
But they generally have a greater capacity to adapt than non-metropolitan regions, which makes these areas less vulnerable to climate change.
The are some exceptions.
As regards to this, the ESPON study mentions cities along coasts, in the Alps and in southern-eastern Europe.
The question is more varied for rural areas, with those in central and northern Europe facing low-level or marginal variations and, in some cases, positive ones as the climate conditions only worsen slightly in them or are more favourable.
The rural areas of southern Europe, on the other hand, are hit harder because of their hotter, drier climates.
The researchers also put mountainous regions among the most vulnerable areas, in particular in Greece and Spain, along with Alpine regions and coastal areas, especially those on the Mediterranean and on the south of the North Sea.
The lowly populated areas of northern Europe will mainly suffer the effects of greater rainfall and of related problems such as rivers breaking their banks. (ANSA).