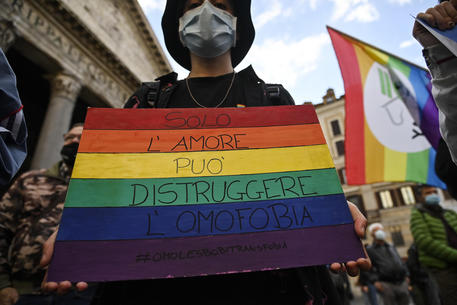 (ANSA) - ROME, JUL 20 - The rightwing League party on Tuesday tabled 700 amendments to a homophobia bill now in the Senate, which has been approved by the House but which does not appear to have a majority in the upper chamber.
Matteo Salvini's nationalist party, which says the bill curbs freedom of expression, said it would withdraw the amendments if the centre-left Democratic Party (PD), whose member and gay activist Alessandro Zan filed the bill, says it is willing to negotiate about their objections.
PD leader Enrico Letta on Monday ruled out negotiating with Salvini saying he was homophobic as shown by his support for Hungary's anti-LGBTQI+ laws.
Amid the impasse, it is feared that the bill may be put off until after the summer recess.
The battle over the long-awaited draft legislation designed to combat homophobia resumed a week ago, when the Zan bill reached the floor of the Senate on Tuesday, eight months after it was approved by the Lower House.
The bill risks being sent back to the Upper House's justice committee and, therefore, facing a fresh delay if an agreement is not reached among the parties supporting Premier Mario Draghi's government.
The bill has been at the centre of tension for weeks, with the Vatican recently getting involved, expressing concerns that it could breach the Lateran Treaty that regulates relations between the Italian State and the Holy See/Catholic Church.
The Vatican and conservative Italian political parties are worried that the bill could curb freedom of expression, in part because it allegedly leaves areas open to interpretation by courts because it is too vague.
Zan and the rest of the PD argue that the bill would not crimp freedom of expression, and Catholic conservatives would still be able to state that they find homosexuality sinful.
The bill would make homophobia an aggravating factor in acts of violence or discrimination like racism already is.
The bill would also set up an anti-discrimination day that private Catholic schools would be expected to take part in.
The parties opposed to the bill in its current form, led by Salvini's League and Silvio Berlusconi's Forza Italia (FI), are seeking a delay to have more time to reach an agreement on a package that can have wider support.
The PD, the anti-establishment 5-Star Movement (M5S) and the left-wing LeU group are against further delay, saying the law is already long overdue. (ANSA).