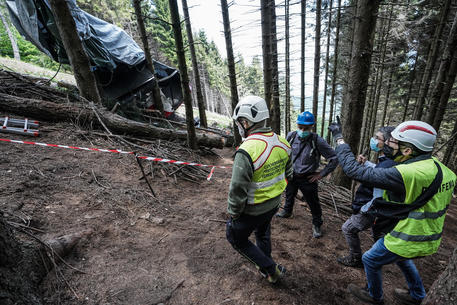 (ANSA) - ROME, JUL 2 - The probe into the Mottarone cable-car disaster, in which 14 people, including two children, were killed in May, has expanded, with 12 people and two companies now under investigation.
Initially three people were put under investigation - the head of company that ran the cable car, a company director and the service's operational chief.
The operational chief has reportedly admitted to deliberately deactivating the emergency braking system to stop it after it repeatedly kicked in following a series of technical problems.
The emergency brakes should have held the car steady after one of the cables broke.
Instead the car slid back until it hit a pylon and then plunged to the ground.
The two companies are Ferrovie del Mottarone and maintenance company Leitner.
Among the people under investigation is a Leitner employee who, in November 2016, did a test on the cable that broke.
In a statement, Leitner reiterated its full willingness to cooperate with the investigators and said that its maintenance operations and checks were done in full compliance with the law and with its contractual obligations.
The cable car connecting the Lake Maggiore resort of Stresa to the summit of the Mottarone mountain crashed at some 1,500 metres above sea level. (ANSA).