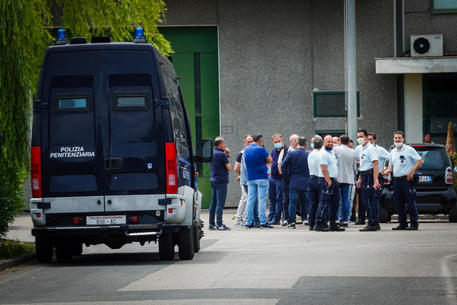 (ANSA) - NAPLES, JUN 28 - Italian police on Monday arrested 52 prison officers on suspicion of mistreating prisoners in quelling a riot sparked by a case of COVID-19 among inmates in the middle of the first virus lockdown last year.
Naples police sent in special penitentiary police forces after the April 6 riot at the jail at Santa Maria Capua Vetere near Caserta north of Naples.
The special forces are suspected of brutality and may also face charges of torture in the methods used to put down the riot and mistreat inmates after it, judicial sources said.
Warder unions SPP and USPP called the arrests "disproportionate" and "incomprehensible".
Inmates rights group Antigone said full light must be shed on the violence.
A preliminary investigations judge (GIP) said prisoners were made to strip and kneel and beaten with guards wearing their helmets so as not to be identified in what he called "a horrible massacre".
Some 15 men were also put in the slammer without any justification, the GIP said. (ANSA).